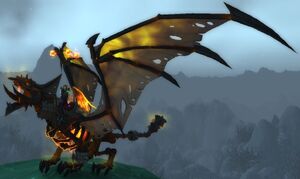 This item drops from Nightbane in Return to Karazhan.

Arcanagos sought to turn Medivh away from experiments into the arcane, but the influence of Sargeras had corrupted the wizard too deeply, and the great dragon paid for the transgression with eternal, burning agony.

The mount has a 20% chance to drop for every player in the group eligible for loot, up to a 100% drop chance if all five players are not loot locked. It will only drop for players who do not already have it.[1]

There has been some confusion over how this drop works so we wanted to provide some details.

The mount has a 20% drop chance multiplied by the number of loot eligible players (even if they have the mount).
Note: The mount will only drop for someone who doesn’t have the mount.