For the critter, see Snake (critter).
Not to be confused with serpent.

Snakes are legless reptilian beasts and critters found all across Azeroth, Outland and Draenor. Many, but not all, are venomous. Most snakes are rather small, but some types have been seen growing to enormous sizes.

King snakes are often seen sunning on the exposed rocks high in the Badlands.[1] The ill-tempered ash viper makes its home around the fiery molten pits of the Burning Steppes.[2] The brown snake is native to Horde-controlled territories. It seems unremarkable until its victims are within range.[3] Brought to Orgrimmar aboard merchant ships, the short-lived water snakes are considered pests by the city's residents.[4] Hunted for its beautifully patterned skin, the majestic emerald boa thrives alongside Azeroth's lush rivers.[5] When hunting or evading predators, the moccasin can travel on the surface of water for short distances.[6] Native to Azeroth's desert regions, the resilient sidewinders can survive for weeks without water.[7] Zooey snakes possess hooked scales, allowing them to slither up Kun-Lai Summit's rocky slopes and steep cliffs.[8]

Unlike other snakes that actively hunt, the crafty adders hide in thick foliage and ambush their prey.[9] The coral adder's venom is so deadly that one bite has been known to kill a full grown kodo beast.[10] Elder pythons have been known to swallow gnomes in one gulp.[11]

Late in life, if the environmental conditions are correct, a Death Adder may shed its skin and undergo a transformation into an Imperial Python.[12]

Due to recent accidents, the goblin cartels have prohibited anyone from bringing snakes on a zeppelin.[13] Snakes of all types are venerated throughout troll culture.[14] The crimson snake is favored among the Darkspear trolls for not only its vicious nature, but also its steadfast loyalty.[15] Stranglethorn's Gurubashi trolls often capture the powerful tree pythons to keep as pets... or to cook as meals.[16] Orcish wyvern riders carry envenomed spears that have been coated with the lethal venom from Stranglethorn's giant jungle snakes. When pierced by these spears, the riders' enemies are weakened and slowly eaten alive as the vile poison courses through their bodies.[17] Brave assassins sometimes capture coral snakes to use their highly toxic venom to poison weapons.[18] The Jade Forest's mountain hozen fear the venomous grove vipers and often hunt them out of pure spite.[19] Bamboo pythons are a type of snake used by the Shado-Pan in their Trial of the Red Blossoms.[20]

Years ago, humans introduced rat snakes into Duskwood to cull the local rat population.[21] Wildhammer dwarves train young gryphons by sending them out to hunt rattlesnakes in the Twilight Highlands.[22]

Long ago, Mount Hyjal's druids tempered the rock viper to live in peace alongside the region's other creatures.[23] A favored companion of Kirin Tor magi, the albino snake makes one wonder whether it's truly a snake or something else altogether.[24] The Jade Forest's pandaren consider the temple snakes distant relatives of the revered Jade Serpent, Yu'lon.[25] 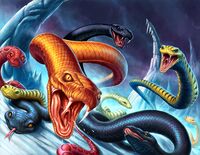 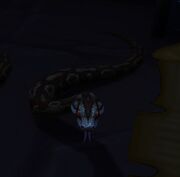 Model introduced in Mists of Pandaria.

Snakes are also commonly found as wild battle pets around the world.

Snakes are small, legless, slithering reptiles. Snakes are usually not aggressive, fleeing when confronted.[26] Vipers are a type of snake.[27]