From Wowpedia
(Redirected from Snap dragon)
Jump to: navigation, search

Snapdragons (also written snap dragons) are lizardlike predators able to spit painful acid. Snapdragons are not a natural species: ten thousand years ago, on order of Queen Azshara, they were created by the mage Professor Elryna and her students in Nar'anan by modifying wolves.[1] Mainly found on Nazjatar, they are captured at a young age by the naga and raised to serve their hunters as loyal and fierce companions.[2] While quiet hunters in the water, they are far less stealthy on land.[3] When a snapdragon bites you, the worry isn't about the bite itself, but the poison that will begin to eat away at the wound.[4] Snapdragons will eat anything, including your arm if you don't move it away quick enough.[5] The claws of a mature snapdragon are razor-sharp and more durable than steel.[6]

During the period following the Third War, Illidan's Naga used snapdragons in battle and bred them at Spawning Grounds. 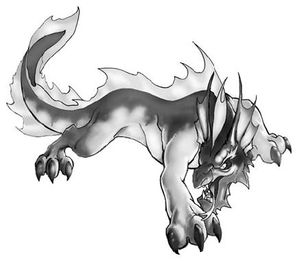 A snap dragon in the RPG.

The snap dragon is a long, wiry, lizardlike creature. It runs with an undulating grace reminiscent of a snake. Its head is also snakelike, and a red tongue darts from its mouth. It is obviously amphibious, with a red, finlike ridge extending down its spine. Large fins flare from its head and tail. They appear as trained beasts in many naga armies. In the wild, snap dragons dwell along tropical coasts, entering the water to lay in wait for prey. When they sense it coming near, they rise and spit acid until the prey falls. The snap dragon then ambles over and feasts on the partially liquefied meal.

Many snap dragons exist in the South Seas, where they are a danger. All avoid them except the naga, who train the beasts for war. Snap dragons spend much of their time on land, where their acidic spit is effective, but use the water to surprise prey and to move quickly through their territory.

Snap dragons attack from ambush. They use watery environments to conceal their presence, and to move to where they can attack prey from the most advantageous places. They spit at their prey repeatedly and retreat from attackers, only to circle around and try again. They bite only if cornered or if underwater.

Snap dragons function equally well on land and in the water.[7]