Not to be confused with "Stormsong".

Among the Frostwolf clan, all of the young warriors have wolves to help them hunt and survive. The orcs, in return, share their food with the wolves, heal their injuries, and protect their cubs. It is a relationship of equals looking out for one another, rather than the master/pet relationship one might expect. While Thrall was living among the Frostwolf clan, Snowsong chose to bond with him for life.[1] 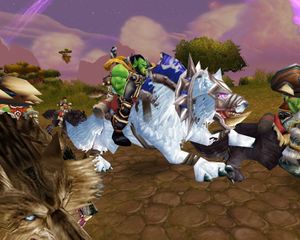 When the Emerald Nightmare enveloped Azeroth, Snowsong mourned her "hunting-brother" Thrall who has been claimed by the Nightmare. It was also Snowsong who first catches the scent of the shadowy invaders assembling outside Orgrimmar's walls, simultaneously alerting the defenders that the lookouts already have fallen prey to the Nightmare.[2]

During Thrall's journey to Feralas, Snowsong accompanied Thrall. Thrall helped the local night elven druids in their troubles against the hostile elements. He then learned that his true journey has just begun. Thrall alongside the green dragon Desharin went to the Caverns of Time and Snowsong was said to be delivered to Jaina Proudmoore.[3]

Snowsong is revealed to be too old to ride into battle any longer, but Thrall still takes her out for spirited runs. Thrall took his son Durak on a ride to One Keg during a recess in the trial of Garrosh Hellscream.[4] 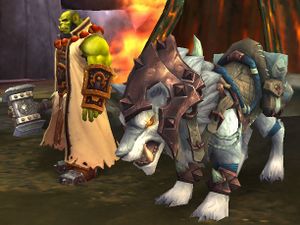 Snowsong with Thrall in Frostfire Ridge.

Despite her old age as revealed in War Crimes, Snowsong accompanies Thrall to the alternate Draenor thirty-five years in the past, where she serves as his mount throughout his time there.

After Thrall gives the Doomhammer to the new Farseer of the Earthen Ring, he leaves to think. Snowsong stays behind at the Heart of Azeroth with Aggra and Snowfang.

Thrall does not ride Snowsong in Shadows Rising, instead riding a new wolf named Moonpaw. While it is possible that Snowsong has simply retired in Nagrand with Thrall's family, it may be that she has passed away from old age. Thrall's new design in Battle for Azeroth is partly comprised of white fur, which may mean he is wearing Snowsong's pelt in the same way that his father Durotan wore the pelt of his late wolf companion Stormfang.