Exarch Othaar was one of the five Exarchs, leaders of draenei society under Prophet Velen, until he swore himself to Sargeras and the Burning Legion, transforming into a man'ari eredar and taking the name Socrethar. 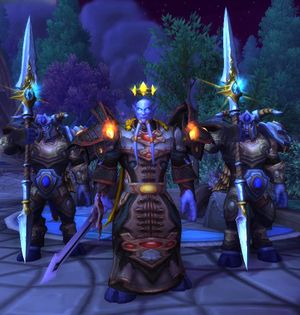 Exarch Othaar, before his betrayal

Othaar is first encountered in Elodor in Shadowmoon Valley where he gathers the other Exarchs — Maladaar, Akama, Hataaru and Naielle — in order to hear Maraad's request. When the Exarchs gather, Hataaru is found dead. Othar points out that Naielle was arguing with him earlier and that Maladaar knows the tools of the enemy. He and Akama forbid Maladaar from speaking with Hataaru's spirit.

Othaar later becomes the twisted Socrethar and betrays his people in favor of power. Responsible for the imprisonment of Exarch Maladaar and the murder of Exarch Hataaru, he is transformed into a powerful eredar and adopts a leadership role amongst the Sargerei, leading them and the forces of the Burning Legion to claim the draenei capital of Shattrath after its liberation from the Iron Horde. The Auchenai and the Sunsworn team up with the Sha'tari Defense in order to cast him out and free the city. Before the attack, Archmage Khadgar instructed Modera to spy on Socrethar's Rise.

[100] Socrethar's Fury, Khadgar sends the commander to liberate Shattrath of Socrethar's presence. Socrethar has been working with the Shadow Council in the name of the Burning Legion.[2] With the assistance of Lady Liadrin and Exarch Maladaar, Socrethar is challenged and killed.[1]

His avatar can also be killed in Shattrath.

Following his defeat in Shattrath, however, Socrethar used a corrupted fel vigilant to preserve his soul, and can now be found in the halls of Hellfire Citadel.[3] He was once again attacked by the adventurers and his vigilant was used against him, defeating his soul. However, with his dying breath he revealed he was being consumed by the Nether.

The Exarch Council is the "Hand of the Prophet." We represent the draenei people, and act as the Prophet's messengers, enforcers, and conscience.

It's not clearly stated what class he was as Exarch. He could be either vindicator, paladin or warrior. Ishanah described the main timeline version of him as "a warrior of the Light".[5]

Since the Burning Legion[6] and Twisting Nether transcend all realities,[7] and demon are reborn in the Nether, many questions about Socrethar, or indeed the Eredar in general, arise. Evidently the mortal eredar are not multiversal singularities, as there have been at least two Velens encountered. Similarly, the conversation where Afrasiabi revealed this information did go on to suggest that the situation with the eredar is 'difficult' to say the least. The Socrethar encountered on Outland is clearly familiar with the draenei who confront him, and the fall of Draenor, and vice-versa. So how the two relate to each other is currently unknown.