Soggoth the Slitherer, also known as the Slithering One,[1] was an enormous herald of the Old Gods that was slain by the stone giant Kronn long ago. Soggoth's remains can be found at the Master's Glaive in Darkshore.

According to Archaeologist Groff, the Master's Glaive was the site of an ancient battle. The titans sent twenty of their stone giants against Soggoth. Of those twenty giants, only one survived. The tablets say that Kronn, the largest of the stone giants, allowed himself to be entangled by Soggoth's tendrils -- just long enough to be lifted close enough to the creature's skull and within reach of Kronn's mighty sword.

In the wake of the Cataclysm, the Twilight's Hammer cult sought to resurrect Soggoth. However, due to interference of the ancients and the Alliance, they were only able to resurect a small remnant of the dread being. During the battle that followed, Alliance adventurers were able to slay Soggoth's avatar, putting an end to the Slitherer and saving Darkshore.[2] 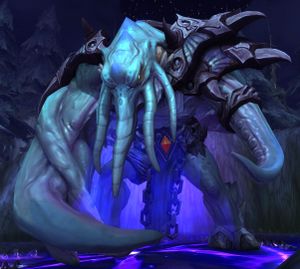 Soggoth the Slitherer in Darkshore, not yet fully manifested into the world.

Soggoth was revived completely, albeit in a weakened state, by the remnants of the Twilight's Hammer.

Soggoth appears as a legendary card in the Whispers of the Old Gods expansion for Hearthstone. Its flavor text reads: "Don't tell Soggoth, but in the future he gets totally owned by the Master's Glaive and his skull becomes a tourist attraction."