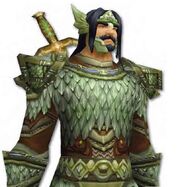 A soldier is an individual who serves as part of the armed forces of a race, nation, or organization. Soldiers serve across Azeroth, Outland, and alternate Draenor. They are the key of any war effort, and their actions can change the course and outcome of a conflict.

According to Drek'Thar, the learned soldier is the soldier that leans on the shoulder of experience.[1]

In the Kingdom of Stormwind, a soldier is a unit in the Stormwind Army that can hold several different ranks, like private,[3] footman or guard.[4] They serve under captains, corporals, colonels, lieutenants, marshals, commanders or higher ranks in the Army or its branches.

The soldier is like a warrior, but with less training and natural talent. Their main task is fighting, or at least being able to fight if the need arises. The soldier swings weapons but does so with less panache, skill, and personality than a warrior. Though called soldiers, they are not necessarily part of military organizations.[9]