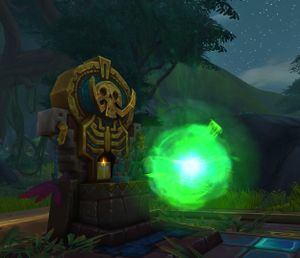 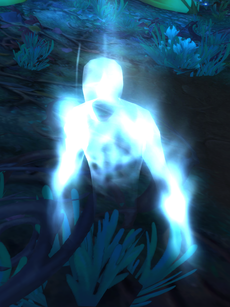 A soul as seen in the Shadowlands.

The soul (or spirit, or life essence[2]) is the very personification of an individual.

When death comes, the soul crosses the veil between life and death and enters Oribos in the Shadowlands. They are brought before the mysterious female Arbiter who judges them sends them to one of the realms of the Shadowlands based on their life.[3] Oribos' denizens swap gossip and anima — soulstuff that serves as both power and currency.[4]

Souls can appear as ghosts,[citation needed]  tortured spirits who writhe in the agony of undeath. Unable to realize that they are no longer alive, they roam the trackless wastes between the Shadowlands and the physical world, seeking release from their eternal suffering. Though they are not necessarily evil, they hunger for physical contact, often causing great harm to any living beings they touch.[5]

When a soul is consumed by the Void, an echo of the soul is all that is left behind. Neither in the physical or spiritual sense of the word would these echoes be considered alive. The echo is merely a twisted reverberation of the anguish left behind by the soul as it is consumed. These twisted echoes of the dead are merely the distorted reflections of once noble spirits.[6]

Wielders of the Light can use Holy magic to appease or grant peace to unrested souls. Fel magic however consumes souls. When a soul is devoured by fel energies, it produces more fel and is utterly destroyed. An echo of the soul known as a soul shard (or soul fragment) can be produced by the spell caster. Soul shards can be used to power spells, or to create a connection to the Twisting Nether, pulling a demon through against its will.[7]

Souls can also be given physical existence again. This process is called

[Resurrection]. There are two main ways to resurrect a person, through Shadow magic, creating undead, or through other means, most commonly through Holy magic. The souls of the undead are imperfectly attached to their bodies; the dark magic that sustains them is a buffer that prevents their souls from properly joining with their bodies. This is why undead feel only faint sensations of pain or discomfort from most physical stimuli, and why the Light is so painful to their existence. The primary exception to this rule are liches, as liches bind their souls to a phylactery and then use the phylactery to generate a physical form; this process is why lich bodies look nothing like their mortal bodies, and also why it is necessary to destroy a lich’s phylactery to truly kill them.[8]

Soul gems were used to entrap the soul of Grommash Hellscream and Yenniku.

The first generation of death knights were souls of orc warlocks trapped in the bodies of human knights.

As a power source

Items are often "soulbound", preventing them from being traded to other characters.

Utilizing and manipulating souls is a big theme for the warlock class.