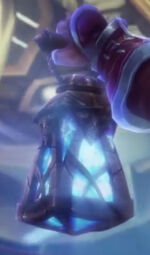 The Soulcage in the hands of Sylvanas.

The Soulcage was a magical lantern with the power to compel the soul of any being.[1] It was granted to Sylvanas Windrunner by Helya as part of the secret deal they made in Helheim.[2] Sylvanas used it in an attempt to subjugate Eyir in the vault of Skold-Ashil, but Genn Greymane freed her when he smashed the lantern.[3] Afterwards, the adventurer received its shard to empower their artifact weapon.

An adventurer used a similar lantern to gather the pieces of their spirit after Helya sundered it.[4]