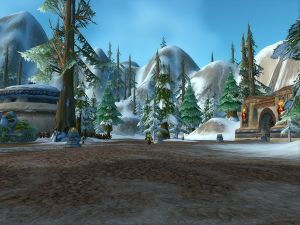 South Gate Outpost is a dwarven settlement built in western Loch Modan. It lies in the middle of the South Gate Pass, which links Dun Morogh in the west with Loch Modan in the east. Before the Cataclysm, the outpost was considered part of Dun Morogh.

The mountaineers stationed at the outpost have cleared out most of the encroaching wildlife, and thus do not face the same amount of problems as do the dwarves of North Gate Outpost. Many travelers pass through the outpost on their way to or from Thelsamar.