For the south sea on Draenor, see South Sea. For other seas, see Sea.

The South Seas in Chronicle.

The South Seas, also known as the South Sea,[1] is a body of water that surrounds the southern regions of the Eastern Kingdoms and Kalimdor, and the northern coasts of Pandaria. Notable islands like Zandalar, Kezan or Tel'Abim are located here. Since this sea is found in between the continents, it is a portion of the Great Sea.

Regions adjacent to the South Seas

The South Seas were originally planned to be the setting for World of Warcraft's first expansion. Johnathan Staats describes it as having had a flavor similar to Booty Bay and Stranglethorn Vale and explains that the development team were extremely enthusiastic about pirate themes following the release of the Pirates of the Caribbean film.[5][6] However, technical limitations meant that the servers were getting too overloaded with data in Azeroth and its continents of Eastern Kingdoms and Kalimdor, preventing Blizzard from just adding more zones without either upgrading the server equipment or making the code more efficient. Thus, the team decided not to add more Azeroth content and instead use another realm, Outland, as the setting for the first expansion, later named The Burning Crusade.[6] This is also why the Azuremyst Isles and Quel'Thalas are on the Outland realm instead on their proper continents.

10,000 years ago all the lands in Azeroth were part of the same giant landmass: the primeval Kalimdor. During the War of the Ancients, Queen Azshara summoned the Burning Legion with the Well of Eternity's energy, and at the climax conflict, the well imploded and tore the giant continent asunder, splitting it into the continents as they exist today... and a few islands. It also created a raging magical vortex known as the Maelstrom, which occupies the center of the Great Sea. This vortex forms the northern boundary of the South Seas, and south of it are several tropical islands. Though small, these islands have played pivotal roles in history.[7]

The Bloodsail Buccaneers ply the waters between Azeroth and the South Seas, and occasionally travel west toward Kalimdor.[11] 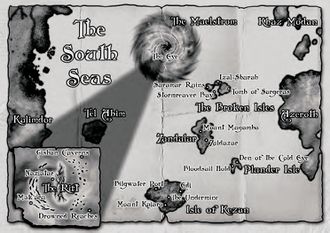 Map of the South Seas in Lands of Mystery.