From Wowpedia
(Redirected from Southsea Pirates)
Jump to: navigation, search 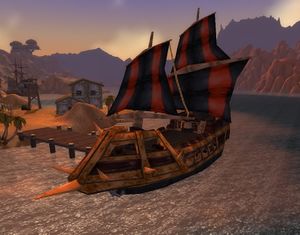 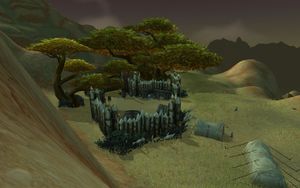 A small Southsea fort with some plunder in the Northern Barrens.

The Southsea Freebooters were based on the Merchant Coast from where they were causing problems to the goblins of Ratchet. Gazlowe, in turn, sent the adventurers of the Horde and Alliance to fight them. The Steamwheedle Cartel tasked Security Chief Bilgewhizzle with teaching the pirates in Tanaris a lesson.

The troll Tazan traded with the Southsea Freebooters.[3]

Over on the goblin paradise of Kezan, these pirates have invaded adventurer's parties with the local citizens. They were also present in the Slave Pits on the Lost Isles seemingly allied with the traitor Trade Prince Gallywix.

After the Fall of Theramore, Jaina Proudmoore traveled to Fray Island and killed all the Southsea Freebooters, marching through their encampments and scouring the buildings clean so that she would have no distractions of using it as a base from which she would unleash her massive tidal wave upon Orgrimmar.[4]

Some members were spotted on the newly found Timeless Isle.

A ship commanded by Captain Blindside and his crew arrived at Oceanus Cove in Azsuna.

The Southsea Freebooters (also known as Southsea Pirates)[5] is a small fleet of mostly goblin pirates that has no landward home — at least none that the authorities have found — but it is a common sight along the coast of the Barrens and in the free port of Ratchet. These scoundrels are just one of a number of pirates who roam the trade routes from Darkshore to Theramore in search of fortune and plunder.[6] They are led by the human buccaneer Andre Firebeard.[5]

In Tanaris, the Southsea Pirates get their water by raiding, or simply sailing further up the coast to resupply. If it were not for them, the Gadgetzan Waterworks Company could ship in supplies from Steamwheedle Port — but the pirates intercept most shipping these days, so until they are dealt with, things will stay as they are.[5] Steamwheedle Port's inhabitants spend most of their time ﬁshing and ﬁghting off Southsea Pirates.[7]

Volatile Rum is enjoyed by these pirates, who keep the secrets of its creation… well, secret.[8]