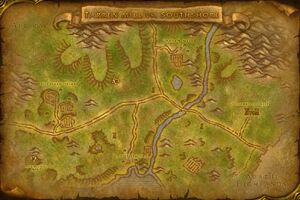 Southshore vs Tarren Mill (SS vs TM), also referred to as Tarren Mill vs Southshore (TM vs SS),[1] is a 40vs40, "team deathmatch-style" battleground, released as part of World of Warcraft's 10-year anniversary event. It is only available for a limited time,[2] although it may return again at a later point.[3] The battleground is available in two brackets: level 100, and levels 90-99.[4]

As well as the usual currencies, winning the battleground will reward a faction-specific title: Tarren Mill Terror for Alliance players and Southshore Slayer for Horde players.[5]

While World of Warcraft has already seen two 40v40 battlegrounds - Alterac Valley and Isle of Conquest - Southshore vs Tarren Mill is the first purely PvP-oriented battleground larger than 15v15.

If you engaged in PvP early on in WoW, you might have fond memories of—and perhaps a few scars from—the endless tug-of-war between Horde and Alliance players at Tarren Mill and Southshore. To recapture that feeling, we’ll be opening a Team Deathmatch–style Battleground based on that timeless struggle. However, unlike the old days of Tarren Mill vs. Southshore, there will be a clearly defined victor, so you’ll need to work as a team or face crushing defeat.[6]

The battleground will be available for a limited time.[2] The exact length of the availability window has not been stated, but it will be more than a week.[7] Depending on the battleground's success, it may return again as an anniversary event or similar.[8]

As players earn honorable kills, they increase in rank.[11] The higher rank the player, the more points they are worth to kill, with each increase in rank increasing the points gained from killing that player by the same amount.[12] For example, a Rank 10 player will be worth 10 points, while a Rank 1 player will only be worth 1.[12] However, Rank 0 players are also worth 1 point. The system has been announced to go up to Rank 14.[13] Players start at Rank 0 - Recruit.

Rank also provides an X% increase to healing and damage done, and player health. The bonus appears to be equal to the number of the rank, eg Rank 1 - Scout increases damage, healing and health by 1%.

Each player has a buff indicating their current rank, and the amount of points gained from killing targets is displayed in floating combat text when they are killed.[14] Players lose rank each time they die.

Maximum rank is intended to be "pretty easy" to reach.[15] By requiring honorable kills and not killing blows, players are able to gain rank through participation such as healing.[16]

Rank comes in the form of a buff, and will be lost at the end of the battleground.[17]

The battleground uses similar ranks to the game's original honor system. [11] However, the battleground's ranks will not replace actual character ranks from the original system,[17] and there are no plans for participation to unlock titles or gear from that system.[18] The developers have stated that there are no plans for a return of the honor system.[19]

The following table lists the available ranks for each faction. Earning each rank takes a further 10 honorable kills. Honorable kills listed below are the total number required to reach that rank.

Note that the total number of honorable kills required, and the % bonuses to damage, healing and health are estimated, based on the numbers for the lower ranks.

For information on the original ranking system on which these ranks are based, see Honor system (pre-2.0)#Ranks and rewards.

The battleground is based on "the timeless struggle" between Tarren Mill and Southshore.[25]

When the battleground was first released, it required 10,000 points to win, and had a maximum duration of 60 minutes. Around 12 hours after the battleground first went live, the points requirement was lowered to 300, and the duration halved to 30 minutes. This appears to have been in response to player feedback, reflecting difficulties with the arbitrary score objective and excessively long matches, which were easily aborted at the last moment by players on the losing team leaving in advance, forcing the battleground to close and denying the victors their rewards.

A team deathmatch-style battleground was an idea first experimented with in the cancelled Gurubashi Catacombs. The idea was eventually reformulated in the advent of the Arena system. At the time, several reasons were given for the cancellation of the battleground, including "Deathmatch doesn't work as well in WoW PvP".[26]

The developers looked into transforming players' appearance within the battleground to display appropriate vanilla PvP gear corresponding to their rank, but the idea was found to be too great an undertaking.[27]

When creating the zone for the battleground, the developers were unable to reuse the old data from the actual world zone of Hillsbrad Foothills.[28] Matt Sanders, the level designer who created the original zone, and subsequently recreated it for the Caverns of Time instance, was therefore enlisted to create the zone for a third time.[29] The Caverns of Time version was used as a base, with buildings and NPCs replaced with those of the original zone.[30][21]

The battleground was originally planned to be a 100v100 encounter.[31] Senior PvP Designer Brian Holinka even stated at one point that the developers would "cram as many people in there as we can".[32] However, in September 2014 it was announced that the battleground would in fact be limited to 80 players in total, with Holinka stating "Our battlegrounds are not setup to support more than 40 per side."[33]