Southwind Village was once a night elven base of operation in Silithus,[1] but was destroyed by the qiraji during the War of the Shifting Sands. Following the devastation of Silithus by Sargeras, its ruins now serve as a Horde base for the goblin mining operation for Azerite in the Wound. 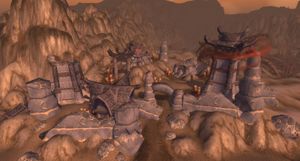 Valstann Staghelm, son of Fandral Staghelm, led a detachment of the night elven army to defend the village, but was captured by General Rajaxx after his troops were slaughtered by the swarming qiraji leading to the village's destruction.

In the following centuries, the village was left overrun by relentless silithid that infested large parts of that area. The horror of the village's initial sundering echoed through time — the tortured spirits of fallen druids and Sentinels wandered the ruins aimlessly, and were led by Shade of Ambermoon.

In the end, the ruined village was completely destroyed, alongside the majority of settlements in Silithus, at the end of the third invasion of the Burning Legion when Sargeras tried to destroy Azeroth. After the discovery of Azerite in the Wound by goblins, the Horde set up a small camp on the edges of its old territory, near some of its ruins.

Southwind Village was once a night elf city, before the Sundering. The elves in Valor's Rest occupy a small outpost of this ancient town, restoring much of it to a livable state. The remainder of Southwind is overrun by silithid. Ghosts of tortured residents also roam the sand-blasted streets.[2]