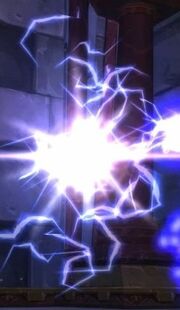 Sparks are a type of lightning or arcane elemental creature that appears in certain places where magic is prevalent. They tend to have a specific purpose, such as healing or buffing a boss, exploding, or summoning adds. It is unknown if they are sentient or just an advanced form of spell that is cast by powerful arcane beings. Sparks should not be confused with wisps, which are ethereal nature spirits that have a superficial resemblance to sparks.

The name "spark" is based on NPC names as no other name is known.

It is possible that these creatures are in fact spark elementals or spark sprites, although there is no evidence for or against this so far.