Speaker for the Dead (Shadowmoon Valley)

For the Talador quest, see 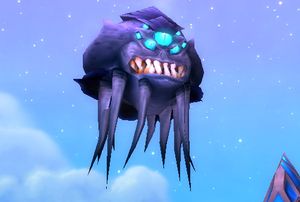 Meet Exarch Maladaar at the cliffs east of the Altar of Sha'tar. Complete the ritual to cleanse and interrogate Hataaru's corpse.

This was a betrayal from within. There's no other explanation for it. None of the Exarchs trust each other now - especially me. But Othaar and Akama can damn their laws. We've got to rout out the traitor and the only way to do it is to speak to the corpse!

Join me just outside the Altar of Sha'tar atop the eastern cliffs. Soulbinder Nyami and I will perform an exorcism to save Hataaru's immortal soul... and maybe learn who did this to him.

Exarch Maladaar says: There is a rat among us. I will find out who.

Exarch Hataaru didn't deserve to die that way. Not like this.

Head east up the stairs and get behind the building. Speak with Maladaar:

Fel energies are even now devouring Exarch Hataaru's soul. We must act quickly.

Soulbinder Nyami will anchor Hataaru's spirit to this realm while I exorcise the demons assaulting him. With luck, we will find out who murdered him.

It will be up to you to destroy the evil as I unleash it. Are you ready, <name>?

I am ready. Begin the ritual, Exarch.

Exarch Maladaar says: Stop - stop the ritual at once! Focus. We must protect his spirit.

One of the five Exarchs is dead. Another is a traitor. Dark times.

We will end this here and now. Can I count on you for one final task?