From Wowpedia
(Redirected from Spec)
Jump to: navigation, search

Specialization, commonly known as spec, defines a player's abilities, strengths and role in the game depending on their class.

Choosing a specialization is the most important choice a player will make after choosing their character's class. It can dramatically alter the character's playstyle, determine their role in combat, and grant them numerous powerful new abilities. Most classes have 3 possible specializations, the exceptions being Druids who have 4 and Demon hunters who have 2, with each representing a different direction in the character's training, and a different approach to playing the class.

Each specialization is designed to perform a specific combat role - tank, healer, ranged DPS or melee DPS - and the active and passive abilities granted to characters of that specialization are designed to form a playstyle appropriate to that role. For instance Protection paladins have numerous abilities to improve their defenses and draw the aggro of several mobs at once, making them perfect for tanking, while Holy paladins have a range of powerful healing and protective abilities, making them adept at healing and aiding their allies. While many abilities are shared by all members of a given class, the additional abilities provided by a character's spec make them capable of performing their determined role to a high standard.

While many specializations are capable of assisting in roles other than that designated for them (such as providing additional healing, damage or off-tanking) a player's role is largely determined by their choice of specialization. For example, a Holy priest has a number of damage-dealing abilities and can deal a fair amount of damage if necessary, but cannot compete with the damage output of a Shadow priest, while a Shadow priest is capable of providing emergency healing to teammates if need be, but cannot compete with the healing capabilities of a Holy priest.

Some classes - sometimes called 'pure' classes - have the same combat role for all their specializations, while others - known as 'hybrid' classes - can perform a number of combat roles depending on their specialization. However, even for pure classes, each specialization has its own character and playstyle, different strengths and weaknesses, and offers a significantly different experience of the class. For example, all warlocks deal ranged DPS, regardless of their spec. However, Affliction warlocks excel at damage over time effects, cursing their enemies and slowly draining their health, while Destruction warlocks focus on demolishing opponents with fast, powerful direct damage spells.

Each spec has its own strengths and will excel in different situations. For example, some specs are considered to be more desirable for PvE, while others may be considered better for PvP. Additionally, as each class shifts and evolves over the course of patch changes, so each spec changes in its relation to the class. There are often "flavor of the month" specs, that may perform far more impressively than other specs, while certain specs may be considered to be fairly weak. However, bear in mind that such details change rapidly and frequently, and the enjoyment gained from playing a given spec is usually far more important than its perceived effectiveness during the current patch.

By determining combat role, choice of specialization can also determine secondary factors such as which stats, gear and bonuses are favoured. For example, healers may seek items that grant spirit, while tanks may choose to wield shields, and may seek stats like dodge and stamina. This often leads players to accumulate separate sets of gear for each spec they play. Similarly, for hybrid classes, choice of spec may determine which attribute is increased by that character's armor specialization bonus. The armor specialization bonus is a 5% increase of your primary attribute while wearing your correct armor class (plate, mail, leather or cloth) in all slots. Tanking specs will gain stamina; plate-wearing melee DPS specs will gain strength; leather and mail wearing DPS specs will gain agility; and healers and caster DPS specs will gain intellect. 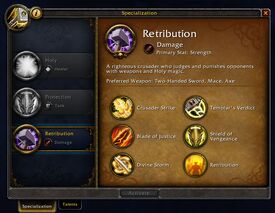 Specializations become available at level 10. When a character reaches this level, they are able to select a specialization, and will be prompted to do so. Specialization can be chosen through the Specialization & Talents window. This can be accessed by clicking on the appropriate icon on the interface bar at the bottom of the screen, or by pressing the N key (if you haven't unbound it or bound the key to a different action). From this window, select the Specializations tab will list the specializations available to your class, and display some information about each.

The Specialization tab features a pane for each possible specialization. Each spec's role and primary stat are provided along with some flavor text; beneath this a few key abilities are listed, intended to give the player some insight into the specialization's character.

Upon reaching level 30, characters can train in Dual Talent Specialization, allowing them to switch back and forth between two 'specializations', each with its own specialization, talents, glyphs, and action bars. Note that, despite the name, these 'specializations' are not actual specializations; rather they are two alternate customisations of your character. Each of these 'specs' can be altered and re-specced separately, and may choose the same specialization if desired. This feature can be useful for allowing players to alternate between two sets of customizations without re-speccing, saving gold and time spent. For example, a warrior may choose to play dungeons as Protection (Tank), but prefer to quest as Arms (DPS); or a player may have a PvE build and a PvP build, even if both share the same specialization.

Below is a complete list of the specializations available to each class. For a full list of active and passive abilities granted by each specialization, click on the name of the spec, eg Discipline.