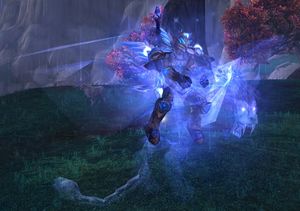 The Spectral Wind Rider mount is the Horde-side reward for when an inactive player accepts your Scroll of Resurrection and subscribes to World of Warcraft for at least 30 days. This reward became first available on March 6, 2012, but will only be offered for a limited time.

This item drops only for Horde players when they open the

[Spectral Mount Crate]. It is sent through the in-game mail system to one character of your choice, on any of your active accounts.

The invited player must have previously subscribed to the game for at least 30 days and their account must have become inactive on or before March 4th, 2012. If the invited player accepts, they will receive several incentives of their own:

How do you not fall right through that thing? -Maztha