For the ability, see 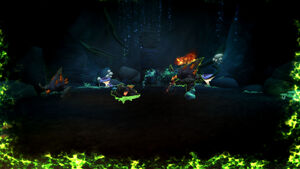 Spectral Sight allows the user to see with magic vision, even looking through walls.

“Your eyes are now my eyes, night elf, their gifts to serve me as well as you...”

Spectral sight is a demonic, magical view of the world.[2] Demon hunters, disciples of Illidan Stormrage, ritually blind themselves in exchange for spectral sight that enables them to better sense their prey.[3]

In the book, World of Warcraft: Illidan, demon hunters are revealed to be able to shift their vision to "perceive the world as [they] once did," from seeing the "ebb and flow of energies" and "auras of living things, some bright, some filled with energy" to "as if [they] had eyes" and "many gradations between." The demon hunter Vandel imagines Illidan "as he had previously seen him" and manages to see a "rough image of the Betrayer...like a child's illustration drawn in mud." According to Illidan, "...it is like working magic. You get a feel for the flows of power. You get a sense of the souls of the living and unliving."[4]

As a mark of favor for professing his loyalty, Sargeras gifted Illidan with demonic eyesight. Sargeras shot forth twin tentacles of dark green flame through the Well of Eternity portal and poured it into Illidan's eyes (the soft tissue seared instantly). Supernatural fire continued to pour into his blackened sockets even after the last bit of the eyes had long burned away. The flames suddenly withdrew and there was no sign of the eyes. There now burned within twin flames, fiery balls of the same vicious hue as that which had wreaked havoc on the sorcerer. The fires burned wildly for several more seconds...then faded until they seemed but smoky remnants. The smoke, however, remained, neither dwindling away nor growing stronger.[5]

When his full consciousness returned, his world was suddenly filled with a maddening display of colors and violent energies. Recalling the words of Rhonin, he focused so that it all comes together. Illidan forced order upon matters. The colors began to organize, the energy to flow with regularity and purpose. Shapes began to form from the natural energies inherent in all things, alive or inanimate. Lady Vashj then offered Illidan an amber scarf, which he wrapped over where his eyes had been, and not at all to his surprise, the scarf in no manner inhibited his new abilities.[6]

Spectral Sight is gained when using a demonic claw (or dagger, each case varies) to ritualistically cut out one's own eyes. The sight is comprised of a variety of dark and light shadings. Light reflects off of objects allowing the demon hunter to navigate unhindered. Beings (namely fel users and demons) shine a radiant assortment of colors making them easy to detect even when disguised.[citation needed]

All demonic "eyes" might (and seem to) have a connection to "the shadows", or the realm of the dead: