For the critter, see Spider (critter). 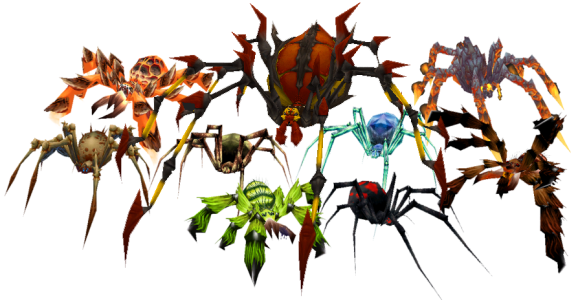 Spiders are a type of animal found commonly throughout Azeroth, alternate Draenor and even the Firelands. The most common of the arachnid family, these critters spin their webs in nearly every corner of Azeroth.[1] Commonly enhanced by corruptive magic, like the fel magic of the burning legion, or the necromancy of the Scourge and the Forsaken, they are also seen as plain wild animals. Spiders can be expected to use poisonous attacks and webbing in combat, often from a distance. One species of spider has entirely lost their carnivorous appetites, and instead feed on plants and fruit.[2]

Traits in World of Warcraft 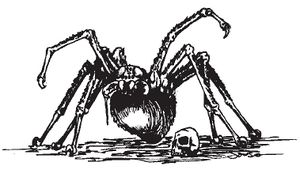 A spider from the Warcraft: Orcs & Humans manual

During the First War, orc warlocks were adept at summoning these creatures to fight for the Old Horde.

Poisonous and huge, these spiders are found in dwellings long forgotten by time and man. Their bite is venomous, and their many legs make them an agile opponent. Having grown so large from years of hunting increasingly larger prey, they have learned to hide in dark places and attack from the shadows.[3]

The Warlock clan have used their magiks to create the hideous abomination that they call spiders. Mutated from the smaller creatures commonly found in the area, these huge poison fanged beasts are twisted and predatory. While some are controlled by the Warlocks, many grow too large to maintain control over, and are released into the forbidden lands. These giant spiders lurk in dark, dank places and spin their webs, seeking to entrap the unwary.[4]

During the Third War, the emergence of massive spiders in the Barrow Dens beneath Ashenvale Forest was one of the first signs of demonic corruption seeping into the land.

The Scourge has a strong connection with spiders. Large spiders can be found in any area affected by the undead plague, Bone spiders are found serving the scourge and Naxxramas has an entire wing devoted to spiders and spider-like creatures.

Recently, the Forsaken have developed something of a kinship with spiders. The Forsaken tend to them in the fields of Hillsbrad Foothills, allowing them to latch their eggs onto a suitable carrier - usually some variation of bear, until the little spiders are of age to be collected from their host. The spiders are used as sentries, pets and companions among the Forsaken empire. Dark rangers can be seen alongside domesticated spiders around the Ruins of Southshore.

There are eight models for spiders in World of Warcraft:

Within those different models, several skins are used to show different species, which include, but not limited to the list of species below.

Spiders in Warcraft III were a type of hostile creep, who could be found in a number of different tilesets.

Though many scholars believe that all spiders trace their roots back to the ancient kingdom of Azjol-Nerub, the giant spiders of Kalimdor have made a claim to the shadowy corners of Ashenvale Forest. Though not necessarily evil, wild spiders can become fearsome opponents if they feel their nests have been defiled.[5]

For named spiders of specific types, see the individual articles.

Much like moths, spiders are one of the more common types of wild battle pets found around the world.