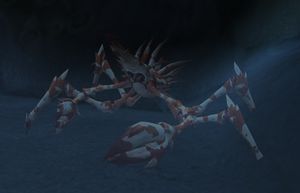 Spider crabs (or spidercrabs and spine crabs[1]) are a type of crabs. They originally appeared in Warcraft III: The Frozen Throne as Sunken Ruins creeps, and were reintroduced in Battle for Azeroth in Nazjatar with a new appearance.[citation needed]

Spider crabs a.k.a. spidercrabs are large crabs standing 3 feet tall on their six thick, spiderlike legs. They have brightly colored shells, and their left claw are significantly larger than their right. Lurking on seashores across Kalimdor, spider crabs are giant, aggressive predators. Spider crabs are apt to attack anything that enters their territory, whether or not they can eat it. Spider crabs often seem to cluster together in colonies. The largest spider crabs — sometimes called limbrippers or, for the really big ones, behemoths — lead the way. If a spider crab hits with both claws, it latches onto the opponent’s body and tears the flesh.[2]