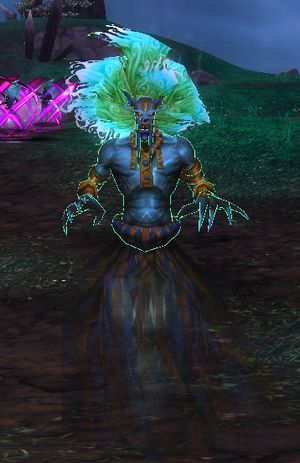 Return 8 spirits to their remains at the Deadtalker's Plateau in Townlong Steppes.

The spirits that the yaungol are entrapping from the remains of their ancestors still have a bit of the essence of life within them.

If you defeat the spirits in battle, you can collect that essence as spirit dust, and then return it to their corpses, which will send them, finally, to the next life.

This is the only way to set right what the Deadtalkers have done. It will also help keep us safe.

Have the spirits been returned to rest?

[90 Daily] The Enemy of My Enemy... Is Still My Enemy! before heading out. Don't forget to grab an NPC helper, either!

Circle around the Underbough to the northwest to reach Deadtalker's Plateau. Deadtalker Corpsedefilers are walking around with seven Defiled Spirits around them, with a total combined health pool of 1.3 million. Try to crowd-controll the deadtalker and AoE down the group—the ghosts merely have ~110,000 health each. Be wary of the elite Deadtalker Crushers wandering around! It takes four

[Ancient Spirit Dust] for each set of Defiled Yaungol Remains, so keep that in mind.

Once Deadtalker's Plateau and Spirit Dust are both complete, turn them in and pick up

[90 Daily] Uruk! from the companion. Uruk is on the northwest part of the plateau overlooking the Westersea. A level 90 yaungol, Uruk has 1,181,000 health and the following abilities:

Kill him, then keep heading north to the Gai-Cho Battlefield and Fire Camp Gai-Cho. Skip the battlefield itself and head up to the fire camp to start killing yaungol and looting

[Highly Explosive Yaungol Oil] Barrels. Only ten barrels can be carried at a time, so gather a bunch, go out and kill the units on the battlefield, then repeat. Don't kill all of the yaungol on the mesa before killing the combatants down below.