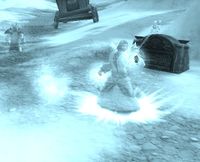 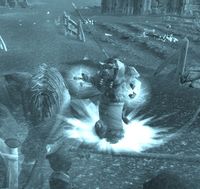 Spirit Guides are factional Spirit Healers in battlegrounds and PvP zones who resurrect players who have fallen in battle. Spirit Guides can only be seen by players of the appropriate faction.

Unlike normal Spirit Healers, Spirit Guides resurrect players with full health and mana and no penalty every 30 seconds. In addition, they resurrect pets or minions of the fallen player (if they had one when they died). Resurrected players are also granted the 'Preparation' buff, reducing the power cost of spells and abilities to zero for a few seconds.

In battlegrounds where graveyards can be captured, capturing a graveyard will cause that graveyard's Spirit Guide to despawn, and a Spirit Guide appropriate to the new controlling faction to appear. Any ghosts waiting at the graveyard to be resurrected when it is captured will be teleported to the nearest Spirit Guide for their faction. However, this process takes a moment and can occasionally cause players to miss the resurrection wave.