From Wowpedia
(Redirected from Spirit healer)
Jump to: navigation, search 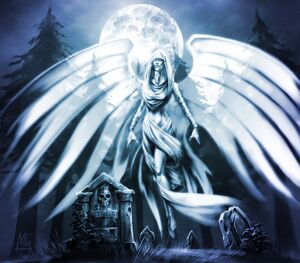 A Spirit Healer in the TCG.

“It is not yet your time. I shall aid your journey back to the realm of the living.”

Spirit Healers are angelic beings usually encountered at a graveyard after death. These floating figures of death and rebirth return people to life where their spirit stands.[2] The Spirit Healers are Watchers, kyrian whose role is to eternally evaluate souls. They are called to those who die to peer into the soul's inner self and evaluate whether they are ready to be dead. If the Watchers deem the soul ready, they will call forth a kyrian Bearer to come and bring their soul to the Shadowlands. If they aren't ready, the Watchers return them to life.[3]

Spirit Healers have blue skin and white wrappings, and their wings are a paler blue. As evidenced by their similar appearance, Spirit Healers are the progeny of the kyrian of Bastion, a prominent Covenant within the Shadowlands.[4] 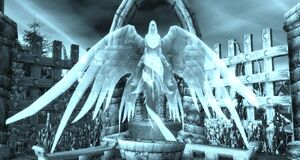 The Spirit Healer of the graveyard in Brill in the Tirisfal Glades.

Spirit Healers are able to resurrect players at the cost of 25% durability loss to all items (both equipped and in inventory) at the graveyard where they are found. In addition, if you are resurrected by a Spirit Healer, you will suffer from

[Resurrection Sickness]. This debuff decreases all of your attributes and damage dealt by 75%, and has a duration that varies depending on your level:

Players that have the Resurrection Sickness debuff also do not award

[Honor Points] if killed by a player of the opposite faction.

If you run to a Spirit Healer at another graveyard and ask her to bring you back to life she will do so, but the resurrection sends you back to the graveyard at which you originally spawned as a ghost.

In battlegrounds, PvP zones, and hub zones such as Tol Barad Peninsula, Isle of Thunder and Timeless Isle, generic Spirit Healers are replaced with Spirit Guides specific to the Alliance or Horde, who automatically resurrect all nearby players of the appropriate faction on a regular cycle. Players resurrected in this way do not suffer resurrection sickness or take further durability damage, and resurrect with full health and mana, along with any pets or minions. 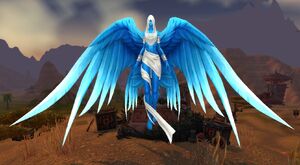 Koiter seen by the living.

When spoken to
It is not yet your time. I shall aid your journey back to the realm of the living... for a price.

Return me to life.

Choosing "Return me to life" will open the following notice window, with the option to either Accept or Cancel.

If you find your corpse, you can resurrect for no penalty. If I resurrect you all of your items will take up to 25% durability damage (equipped and inventory) and you will be afflicted by <1-10> minutes of Resurrection Sickness.

Accepting will create another window, again with the option to Accept or Cancel.

Remember, if you find your corpse there is no penalty. Are you sure you want to take up to 25% durability damage (equipped and inventory) and incur <1-10> minutes of Resurrection Sickness?

Regarding A Dark Place

I'm looking for a little girl named Uuna, have you seen her?

I have heard the cries of the child you speak of.

I shall mark you, that you may pass into this realm and seek her out.

She resides in a place where the barrier between the realms of life and death are[sic] thin, and spill over into your world.

Be warned, you have no power in this place, its denizens cannot be harmed by mortals.

Try as you might, you may not be able to aid your friend.