Spirit of Competition was an event that occurred from August 8–24, 2008 (coinciding with the 2008 Summer Olympics in Beijing, China).

"Every two years, the Spirits of Competition grow especially fervent, and draw close to the mortal realm. During such times, members of both the Alliance and Horde can honor the spirits and earn Competitor's Tabards by seeking to defeat one another in the battlegrounds. For victory in competition, they can also earn the spirits' favor in the form of a prized gold medal - and the special pet it summons."[1] 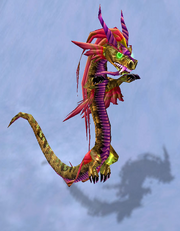 The mention of "every two years" in the description created an anticipation that it would occur during the years of both the Summer and Winter Olympics. However no corresponding Spirit of Competition event appeared during the 2010 Winter Olympics. Upon questioning, Blizzard employee Malkorix revealed that it would only happen in the summer, regardless of when the Olympics occurred. Despite this, the event was not brought back for either the 2012 [2] or 2016 Summer Olympics.

World of Warcraft Community Site The Spirit of Competition
Retrieved from "https://wow.gamepedia.com/Spirit_of_Competition?oldid=5624784"
Categories: