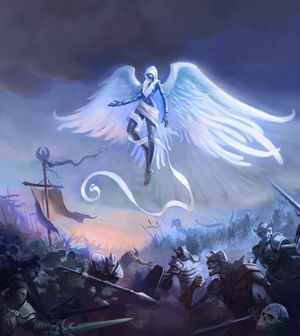 How you die can say a lot about how you lived.

Only pure healing spells can be cast while Spirit of Redemption is active, which means that many defensive spells (including

[Resurrection]) are disabled, as well as

[Holy Nova], which is also a damaging spell. However, there is no connection to a specific school or tree.

Spirit of Redemption does not reset any cooldowns, including those caused by interrupt effects. This is commonly considered a bug,whereas, in fact, it is not.[1]

It is possible to earn the achievement

[Going Down?] using Spirit of Redemption. To earn the achievement, a player must 'fall 65 yards without dying'. By dying in mid air, the priest hits the ground in spirit form, and hence earns the achievement. Aggroing flying mobs or mobs with ranged attacks while flying at least 65 yards above the ground is probably the simplest way to achieve this.

While the priest is in Spirit of Redemption form, any healing spell is free of cost, which makes highly effective and expensive spells (such as AoE spells) especially useful. It is advisable to use spare time by casting preemptive spells like

In some cases, a priest that has run out of mana can sacrifice themselves to activate the Spirit of Redemption and prevent a full wipe.

In PvP, it is almost always worthwhile (if possible) for surviving players to remain within healing range of the Spirit of Redemption while it is in effect, as the priest is capable of providing an endless amount of healing during this time. Unfortunately many ailing players seem to be unaware of the Spirit and/or its function, and stand, flee or fight just out of range, leaving the priest unable to provide healing.

Previous effect: "Upon death, summons a Spirit of Redemption that heals nearby friendly targets for 318 to 360 and another 343 over 21 seconds."