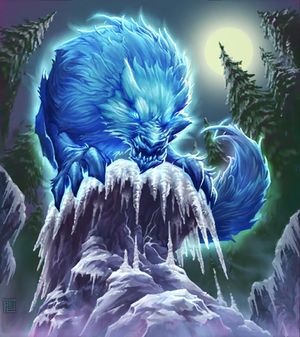 Spirit wolves (or ghost wolves and spectral wolves) are incorporeal creatures summoned by shaman.[1] Spirit wolves are transparent and misty, but every bit as dangerous as the corporeal kind. These manifestations are stronger when summoned with the willing aid of the Spirit of Life.[2]

Thrall and Akama are known to summon spirit wolves. The shaman ability,

When Thrall went to Garadar to connect more deeply with the elements, he and Aggra had the forms of spirit wolves during his vision quest.[3] 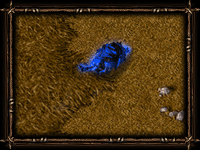 The Far Seer hero can summon Spirit Wolves with the Feral Spirit ablity. They have three variations to go with the different ranks of Feral Spirit.

The spirit wolf is a flickering, almost translucent, black wolf. A faint glow emanates from its body. According to orc shamans, spirit wolves prowl the spirit realms, always hunting and killing. Shaman summon spirit wolves to act as invisible trackers and stalkers, and deadly allies in battle. Spirit wolves are canny combatants, teleporting around the battlefield and making stealthy, invisible attacks when their foes are most vulnerable.[4]