From Wowpedia
(Redirected from Spirit world)
Jump to: navigation, search

The origins of the Shadowlands remain uncertain, but they have existed ever since mortal life first arose in the physical universe.[2] They span all worlds, including Azeroth, on which Icecrown serves as an anchor to the Shadowlands.[4] There are those who believe mortal souls are drawn into this dark place when they die, remaining there forever. Others hope their souls will go on to a brighter place rather than languish for eternity within the cold confines of the Shadowlands.[2]

The Shadowlands can be seen as a shadowy version of the physical world, and can be routinely visited as a spirit when player characters die. Governed by the Covenants, the four ruling realms of the Shadowlands are Bastion, Ardenweald, Revendreth and Maldraxxus (although countless others exist), which serve as the main setting of World of Warcraft's eighth expansion.[5] 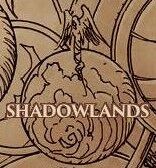 Spirit healers decide when it's time for a mortal soul to pass into the Shadowlands.[5] When a mortal dies and their soul crosses the veil between life and death, it is shepherded by the kyrian to Oribos so that they can be judged by the impassive Arbiter.[6] All of the soul's contents—deeds, misdeeds, thoughts, accomplishments, and failures—are instantly laid bare before the Arbiter, who then judges in a mere instant and sends the soul off to one of the infinite realms of the Shadowlands, each of which is ruled over by a powerful Covenant.[3][5] The Covenants are ancient and powerful orders who have existed since the Shadowlands were shaped long ago, and who bear sacred duties to help maintain the afterlife's ecosystem. Not every soul is filtered into the main four Covenants.[5] Each soul brings with it a vital force known as anima, the product of all of the soul's experiences and actions in life. Anima is the lifeblood of the Shadowlands, making trees grow and rivers flow and is the source that's drawn upon to conduct the magic of death. Great souls—both good and evil—have a lot of anima, while those who have lived humbler lives have less.[3][5] Four of the realms—Ardenweald, Bastion, Maldraxxus, and Revendreth—are especially vital to the functioning of the Shadowlands. However, there could be infinite afterlives, some small and tailored to a single person while others are vast and full of either splendor or torment. Between each realm is a cloudy space which was once rich with streams of anima connecting the different domains, but the current anima drought has caused the realms to become cut off from one another, breeding fear and mistrust among the inhabitants.[7]

When a soul is called from the afterlife, it is free to roam the material realm if it is not restrained within moments of its arrival.[10] While in the Shadowlands, visions of past events may be seen.[11][12][13]

[Tuskarr Ritual Object].[16] A spirit in the Shadowlands can, with enough power over other souls, tear a hole into the living world once they are strong enough. This is how Jin'do returned to Azeroth.[17]

Time passes differently in the Shadowlands.[18] To Salanar the Horseman, who inhabits the realm,[19] mere days passed between the war against the Lich King and the third invasion of the Burning Legion when it was really years.[20]

During the Day of the Dead, the Shadowlands draw closer to Azeroth.[21]

Keeper Odyn used knowledge he gleaned from the Shadowlands to create the first Val'kyr, Helya and tasked her with bringing the souls of worthy vrykul to the Halls of Valor.[22][23]

When Sylvanas Windrunner killed herself in Icecrown Citadel, she found herself in the darkness where she encountered nine Val'kyr that remained in service to the Scourge. While there, the partnership between Sylvanas and the Jailer started.[24]

The Shadowlands are in a state of disarray. In the natural order of things, souls are sorted and sent on to an afterlife realm appropriate to the lives they lived,[5] but since around the time of the Burning Legion's third invasion of Azeroth,[25] the Arbiter has gone mysteriously dormant,[26] and all souls who have perished—including the innocents slain at Teldrassil—are now being funneled directly into the Maw. The Shadowlands are starving for anima even as the Maw continues to grow from the glut of fresh souls. Sylvanas Windrunner has been seemingly perpetrating acts to bring about great amounts of death and destruction. In partnership with the Jailer, they have been working toward a common end for some time.[5] 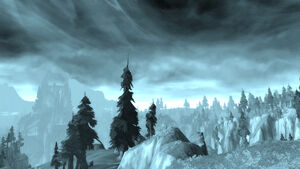 The Shadowlands in Azeroth as seen by a dead adventurer.

[Reagent Pouch].[27] It can also be seen with some devices[28] and potions[29] while being alive. Many not-dead mortals who visit the Shadowlands do not return.[30]

Shirrak the Dead Watcher, an otherworldly being, haunted both the spirit and physical worlds. A Draenei Spirit asked the adventurers to kill it.[31] 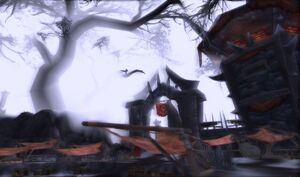 Thrall's soul entered into the world of spirit during a vision quest in order to reconnect with the elements. In it, he was transformed into a spirit wolf and Aggra, in the same form, led him through the swirling mist. The vision quest consisted of witnessing several important past events of his life with the involvement of the elements.[35] 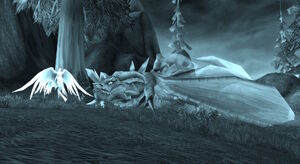 Azuregos and Anara in the spirit world. 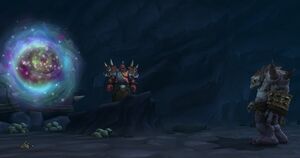 Shadow Gate used by Borgal Doomfist to get to the spirit realm. 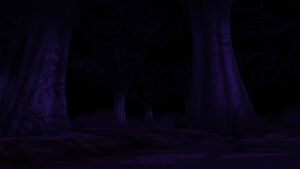 A shaman on Exile's Reach is sent by a Ghost Wolf to the spirit world by burning 4 Veil Blossoms in a campfire to free 3 captured ghost wolf packmates trapped by necrotic energies of the island.[52] 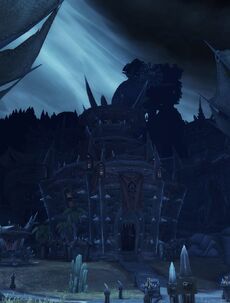 Spirit of Vol'jin and a Horde adventurer traveled through Orgrimmar in the Shadowlands.

Beings of death are ancient and powerful, and it is dangerous to meddle in their realm. When Odyn peered into the Shadowlands, he saw some of its inhabitants: souls in torment, the husks of the dead, ghostly wraiths with no face, and others with no form, all made of death itself. This was enough to frighten even him.[60] Several races in the Shadowlands, such as the kyrian of Bastion, are souls of deceased mortals who have been transformed to serve a new purpose. Other creatures—such as dredgers and stewards—are endemic to the Shadowlands and are naturally born from the magic of death to serve the different realms and help facilitate the process of the afterlife. If a soul or a being native to the Shadowlands is killed in the Shadowlands, they die permanently, and their energy joins the whole of the magic of death.[61][62] If a "workforce" creature like a dredger or steward dies, eventually another member of the same race will manifest to take the place of the one that was killed.[63][64]

[Resurrection] can reunite a dead body with its spirit, and a majority of living creatures from the tauren to the troll shadow hunters claim they can communicate with and call upon the power of the spirits, a widely held belief is that the spirits of the dead remain on the Material Plane — in an immaterial state that can only be altered or contacted through the use of magic.[83] 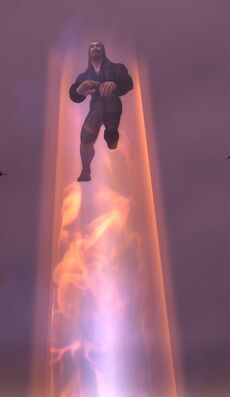