From Wowpedia
(Redirected from Spore Bat)
Jump to: navigation, search

For the mob, see Sporebat (mob). 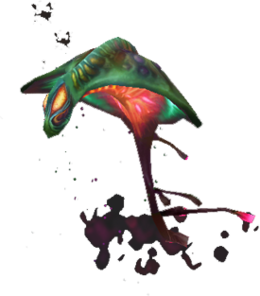 Sporebats or spore bats[1] are flying creatures native to Zangarmarsh in Outland as well as several fungal swamps on the alternate Draenor. 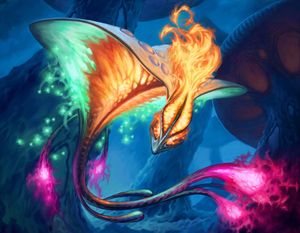 The deadly sporebats are a more highly evolved sub-species of the spore walkers. Like their walker cousins, the sporebats draw ingredients from the environment and combine them to form virulent toxins used in subduing the spore bats' prey. Unlike the walkers, however, the sporebats have the added advantage of flight in their arsenal. No corner of Zangarmarsh is safe as long as these silently gliding death-dealers are on the prowl.[2]

Sporebats are usually docile, but when they attack, their stingers wrap around exposed limbs and can even tear through reinforced leather like it is paper. This is because the entirety of their long, whip-like tentacles are barbed.[3][4] When some species of sporebat collapse, they release a series of spores which affects a variety of species and provides a short-term buff of considerable power.[5]

Wild sporebats are vicious creatures, but if tamed at a young age, they can be loyal companions.[6] 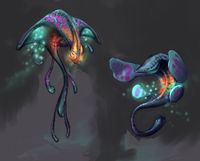 Sporebats are a family of Cunning pets. Through use of their

[Spore Cloud], sporebats can reduce the casting speed of all enemy targets within 6 yards by 50% (25% to players) for 10 sec. This is great in PvP and takes the place of debuffs like Mind-Numbing Poison and

In Mists of Pandaria, sporebats were also given the ability to give spell haste to party/raid members. This is the only pet that provides this buff.

[Energizing Spores] added to their abilities.

[Spore Cloud].
Armor, Health, and Damage had no bonus and now has a +5% bonus.