Spore walkers,[1][2] also known as marsh walkers,[3][4][5][6][7] fen striders,[8][9] or marshtrekkers,[10] are deadly, towering predators native to the wetlands of Zangarmarsh in Outland as well as fungal swamps on the alternate Draenor. They are ancient enemies of the sporelings. The deadly sporebats are a more highly evolved sub-species of the spore walkers.[1]

The marsh walkers of Outland are towering creatures that prowl the wilds, feasting on any lesser creatures they come across.[6] It is believed that the spore walkers evolved over time from the simple organisms that dwell within the depths of Zangarmarsh into the more efficient hunting, killing and eating machines that they are today. Utilizing their environment, the spore walkers are able to derive toxins from the spores and fungi of the marsh, which they in turn use to stun or immobilize their prey. When traveling through the marsh, adventurers would be wise to steer clear of these highly accomplished predators.[1] Spore walkers also have a potent apparatus on their face that can fire a powerful laser, out-doing even the best lasers of goblin design.[2] It's unknown exactly how they work.[11] Wild marsh walkers are dangerously aggressive, but they're loyal and affectionate if you manage to tame them.[3]

Marsh walkers are ancient enemies of the sporelings, whom they've put through unspeakable pain over the centuries. The sporeling T'shu claims that the spore walkers have taken more innocent sporeling lives than any creature he has ever seen.[5]

There is only ever one great mother of the marsh walkers in Zangarmarsh. She is always known as the Black Stalker, and she hatches from one of the eggs left behind when her mother dies.[7]

Lady Vashj has empowered some fen striders with mind-bending powers, though it is unknown how she has accomplished this. Even at an early age these creatures show significant physic ability.[9] 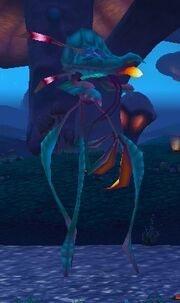 Spore walkers can be tamed by hunters as part of the the exotic water strider family.