For other uses, see Sprite (disambiguation).

Sprites are small, mischievous nature spirits found in Pandaria, on the Wandering Isle, in Val'sharah, and on the islands of the Great Sea.

Mischievous and prevalent, the nature sprites of Pandaria resemble the prevalent features of their surroundings, like shrubs or rocks. Their appearance allows them to easily hide and engage in their favorite pastime – playing tricks on others for inscrutable reasons. Many forest sprites' pranks – disguising themselves as stools to trip people, or throwing fruit and nuts at wanderers – seem harmless. Mountain spirits' means of interaction tend to have a higher incidence of violence and death, involving rockslides and falls off cliffs.

Rumor has it that more deadly, unique varieties of sprites have emerged in sha-tainted areas. If sprites' behavior is simply a reflection of the environments that surround them, any such creatures must be monumentally dangerous.[1]

Plant-like sprites are really just living plants and will resprout later if killed.[2] The needles of the needle sprites that dwell in Kun-Lai Summit can be used in a special acupuncture technique to purge poison.[3]

Sprites shroud themselves in illusion to avoid detection. It is a little-known secret that the dust sprites use for their various tricks have restorative properties.[4] 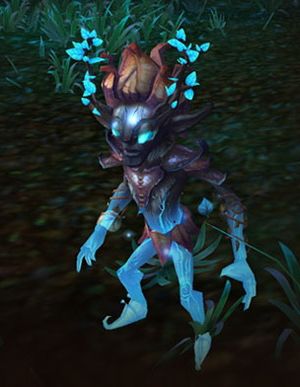 The Amberleaf sprites of the Wandering Isle usually kept to themselves.[citation needed]  Those living in the Wood of Staves were a crueler breed.

The sprites that dwell in and around Rikkitun Village in the Dread Wastes are protected from the mantid due to an agreement made many millennia ago. There are forces from which they are not safe, however. The kyparite worms beneath the ground to the west of Rikkitun will haunt, chase and even eat sprites, and the mistlurkers eat sprites by the handful.[5]

The Darkwoods sprites of Shan'ze Dao have always been capricious tricksters, but now they have fallen under the Shan'ze mogu's influence. Their mischievous pranks were one thing, but united, their dark magic is too powerful and too dangerous to comprehend. The wood sprites may look harmless, but that's what makes them so dangerous.[6] Under the mogu's influence hey grow bolder each day, stealing and killing to satisfy their masters.[7]

The Shadowfae sprites of the Windward Isle are seemingly obsessed with shoes.[8] While fascinated by flowers, the dandelion frolicker has also been known to dance with blades of grass and the occasional weed.[9]

The Ashleaf sprites of the Timeless Isle tirelessly protect the vegetation of the island from the burning fury of Ordos and his minions.[10] They also seem to have a curious relationship with the Crimsonscale Firestorm cloud serpents that dwell in the same area. The serpents seem top enjoy playing a game with the little wood men; they circle for hours, then assault one of the sprites' trees with a burst of fire, which causes the Ashleaf sprites to form a shield of leaves, deflecting the fire and warding off the would-be attacker. The sprites seem adapt at shielding their homes, and the cloud serpents do not seem to be interested in destroying the sprites themselves.[11]

The Thistleleaf sprites of Val'sharah cause problems for the locals by capturing and killing faerie dragons and putting Druids of the Fin to sleep in shark-infested waters.

The Mischievous Sprites in Highmountain are using

The sprites that inhabit the islands of the Great Sea have thought of many traps to lure in unwary visitors.[12]