Spymasters (or spymistresses) are rogues who gather and rely on information in their actions.[1] The most notable master of spies of the Alliance would be Spymaster Shaw.[2] 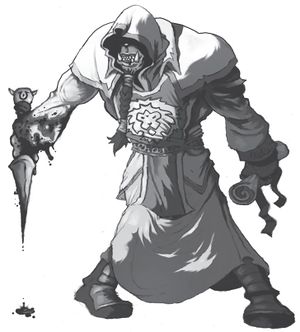 Spymasters (or spymistresses) are a rare group of spies among the Horde, masters of disguise. Like the Alliance's infiltrators, in which the skills and knowledge were originally gained from by torture, a spymaster's main purpose is to charm and manipulate their way into the enemy's trust. However, the Horde's spymasters serve a much more insidious purpose; they are both parts spy and assassin. As a spymaster learns their craft, they learn several useful abilities. They gain insight into the sentient mind, learning how people act and instinctively reacting via a crude, learned form of telepathy. This ability extends into battle; a spymaster learns to feel the ebbs of their opponents' thoughts and to react before they do. A spymaster can extend their telepathy to their stealth, clouding the minds of those around them and rendering themself momentarily invisible. A spymaster also learns that the body is just as malleable as the mind: The ultimate goal of the spymaster is to become so good at disguises that they can physically alter their body into anyone she wishes.[4]

A spymaster's instincts and intelligence are so honed that she can judge the angle and thrust of an incoming blow sufficiently to deflect or otherwise avoid the attack. The spymaster filters information constantly and remembers everything. Through regular contacts, gossip, crystal ball chats, and other situations, he has a deep knowledge of everyday things. The spymaster fits in with whatever group she chooses to associate with, and can successfully emulate any affiliation, whether it be Alliance, Scourge, or whatever.[5]

Spymasters in the world

The Horde is the only faction with the knowledge of how to become a spymaster. Most spymasters are half-orcs and Forsaken: races already familiar with how humans think and act. Most other races of the Horde are not quite as disciplined or diplomatic enough to learn the arts of disguise and telepathy. Occasionally, an orc or troll proves smart and charismatic enough to become a spymaster.

A spymaster's style tends toward the flamboyant, and they are often vain. A spymaster is never content with their normal self, and constantly adjusts to fit their idea of the perfect creature. Spymasters rarely work with other characters, preferring to be by themselves, in part due to their knowledge of what everyone else is thinking. They also tend to be overconfident in their abilities, walking with a certain swagger, and leap at any challenging job just to prove they can do it.

The Horde uses spymasters for most undercover jobs, where chicanery is more important than force. Unlike Alliance infiltrators, however, a spymaster is more often an assassin as well. A common use of a spymaster is to have the agent slip in unnoticed and replace a servant or bodyguard, assuming the murdered victim's role until they can get close enough to kill their targets. Occasionally, a spymaster assumes the role of an assassinated noble, using the victim's wealth and influence to wreak havoc. It isn't unheard of to discover a prized counselor has all along been an agent of the Horde in disguise. Uncovering the spymaster often is even more damaging than leaving the false agent in power, as it shatters the confidence of citizens and creates suspicion among best friends. Who else may be an agent in disguise?

Most spymasters hail from the rogue class, though many come from the expert class. Any person who shows intelligence and cunning attracts the interest of a spymaster. Spymasters frown on crude, muscle-bound types, and thus rarely get along with barbarians and warriors. Most spymasters are indifferent to divine casters, as many are strict atheists. They constantly see into the hearts of others, and doubt that any divine creator would honor such petty creatures. Spymasters enjoy the power and abilities of arcanists, since their powers originated with arcane magic.[6]