For the critter, see Squirrel (critter). 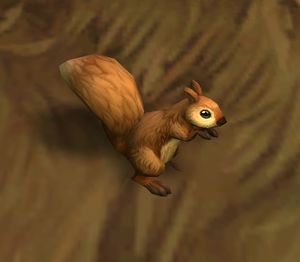 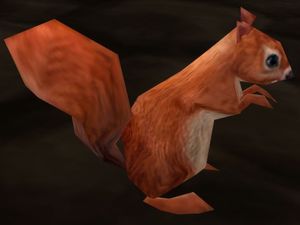 Squirrels are small, furry rodents found in many wooded areas around Azeroth, Outland and Draenor.

Most squirrels hoard acorns for sustenance. Nuts, on the other hand, hoards acorns to stock its supply of ammunition.[1]

After washing in corrupted water, squirrels can spread illness far from the original source, but it's slow to affect the squirrels themselves. In fact, a simple washing will result in a clean squirrel and a safer forest.[2] Undead squirrels have acquired a taste for the strange berries and mushrooms that now grow in Silverpine Forest.[3] More horrifying than its appearance is that the infected squirrels of the Plaguelands no longer hoard nuts, instead collecting rotten, decaying flesh.[4]

Most people do not know the difference between a squirrel and a chipmunk. Most don't care.[5] Many an explorer has been entranced by the adorable nature of the alpine chipmunk, failing to notice its small teeth on frostbitten digits.[6] According to the tales of the night elves, the first red-tailed chipmunk was colored so after the theft and consumption of a sacred apple.[7]