From Wowpedia
(Redirected from Stable)
Jump to: navigation, search 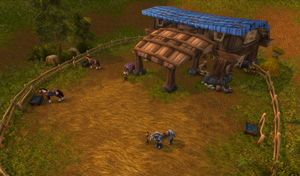 Stables are the places were various animals are bred and trained, to serve as mounts, beasts of burden or even sources of food. Stables can be found mostly in human, Forsaken and dwarven lands, as the orcs are often raising their wolf mounts in kennels instead, but that is not always true. Some stables are part of larger ranches.

Stable masters can often be found at stables even though they can also be found alone, ready to take care of hunter pets and companions.

The care and feeding of the Knight's mount was the main concern of this site. Horses were specially bred and trained here to be more effective for use in combat. By making them faster, stronger, and more responsive to their rider's commands, the stable served as a link between warrior and steed. The stables had to be supplied with riding bits, stirrups, shoes, and horse armor for their training and outfitting - so one could not build a stable without the aid of a blacksmith.[1]

Stables were maintained to breed and house Lordaeron's prized warhorses. Determined to condition the horses to be faster, stronger, and more responsive to their riders, the trainers at these sites took great pride in their work. These brave and loyal stallions carried Knights into battle, and contributed precious fertilizer for the bountiful farms about Lordaeron. The Stables were manned by dependable horsemen and stable-hands who tended to the steeds with great devotion.[2]

Their function was replaced by the castles, which housed their own stables. 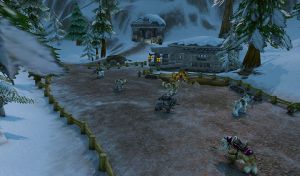 Most communities in the game world will have a stable master where a hunter can store and switch up to 50 pets, as well as revive any fallen companion.

Stables as buildings can be found all throughout Azeroth, Outland and Draenor in many varied forms. They can be integrated into larger structures, like in Shadowfang Keep or Karazhan. Even most farms will have a barn where horses and other livestock can be put.

As the Highlord of the Argent Crusade, Tirion Fordring had personal stables from which he awarded horses to the most skilled champions from the Trial of the Crusader.[3][4]

Here are some examples of places with notable stables: