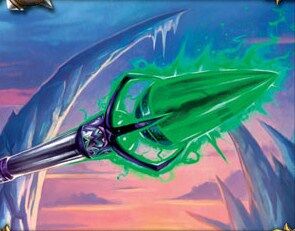 The Staff of Antonidas is an ornate wooden staff formerly wielded by Archmage Antonidas. He gifted it to his most promising apprentice, Lady Jaina Proudmoore.[1]

In the aftermath of Lei Shen's defeat, Jaina tasked Alliance champions to charge the Staff of Antonidas with the remains of the Thunder King's power. After its transformation, the staff was renamed to the

[Storm-Stave of Antonidas]. Jaina claimed that when the time was right, she would use the staff to bring the walls of Orgrimmar crashing down around Garrosh Hellscream's head,[2] but no such thing is known to have happened.

In Jaina: Reunion, the Staff of Antonidas was last seen in the panels set in the past, where she stood in the Violet Citadel, leaving the Kirin Tor during the third invasion of the Burning Legion, resting on furniture. In the present, Jaina's staff has a blue crystal. It is possible that she either left her staff behind and wields a new one, or her staff's appearance changed between Legion and Battle for Azeroth.