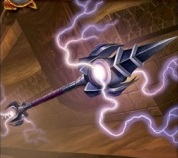 Staff of Sorcerer Thane-Thaurissan is a rare archaeology artifact that requires 450 skill to find and 150 Dwarf Archaeology Fragments to solve. Up to three

[Dwarf Rune Stone] keystones may be used to complete it.

An extremely rare and valuable find, this staff accepts the highest level enchants, unlike the Heirloom staves that are also Bind to Account.

The pieces of this staff still crackle with energy. Yet it also appears to have suffered extensive fire damage.

Sorcerer-Thane Thaurissan was the leader of the Dark Iron dwarves during the War of the Three Hammers. When he lost Ironforge to the Bronzebeard clan, Thaurissan retreated to the Redridge Mountains and founded a city in his name. In a desperate attempt to defeat his enemies, Thaurissan accidentally summoned the demigod Ragnaros, which resulted in the sorceror-thane's immediate death and the formation of the volcanic peak of Blackrock Mountain.