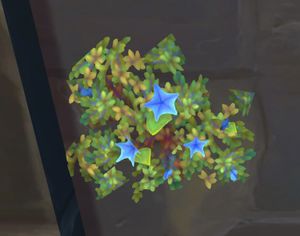 Star Moss is a crafting reagent that herbalists gather from herb nodes of the same name. Scribes and alchemists use star moss as part of their professions.

Star moss nodes exist in Zandalar and Kul Tiras. It has an extremely small chance to be looted from the corpses of enemy mobs. The herb also has a chance to be contained in caches awarded upon completion of a PvP activity like a battleground or killing a player with a bounty on them.