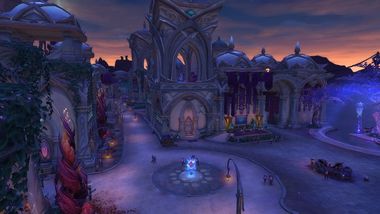 Starcaller Retreat is a district located in the southwest section of the nightborne city of Suramar. Found in the city's lower levels, the district borders other suburban areas in the form of the Evermoon Commons and Siren's Vigil to the east and south, and the Artisan's Gallery to the north. It is a largely open district with a main square and access to Suramar Bay.

The Starcaller Retreat is notably home to the Waning Crescent, an outdoor tavern that acted as a major focal meeting point for much of Suramar's citizenry. At the time of the Nightfallen rebellion, the Waning Crescent (and by extension the Starcaller Retreat) served as the main headquarters and support base for the Nightfallen rebels. The district would eventually suffer heavily for this association when the nightborne authorities and their demonic allies chose to retaliate.

The events of the civil war would ultimately make Starcaller Retreat one of the more active areas of Suramar City involved the conflict.

Nightborne society was thrown into upheavel during the third invasion of the Burning Legion when Suramar's ruler Grand Magistrix Elisande chose to allow the demons access to the city. A resistance movement immediately formed to oppose Elisande, beginning a civil war for control of the city and the wider region. Seeking to gain the support of the nightborne citizens, as well as protect them from Elisande and the demons. The rebels began operating throughout Suramar City, basing themselves in the lower levels in the city's west, which was home to its lower classes and those suffering most under the regime.

The tavernkeeper Vanthir, owner of the the Waning Crescent, quickly became one of the rebellion's chief leaders within the city proper. The Waning Crescent, as well as the Starcaller Retreat in which it was located, subsequently acted as a base for the majority of rebel activities throughout the city, as well as serving as a meeting point for its members. Starcaller Retreat was connected to the rebellion's main headquarters outside the city through a telemancy beacon in the main square, allowing ease of travel for Nightfallen agents. Over time, the insurrection began to accumulate more and more successes, in response to which the Grand Magistrix and her Legion allies eventually chose to respond.

In retaliation, a large force of demons and Duskwatch, under orders from Elisande, marched on the Starcaller Retreat and slaughtered as many of its residents as possible.[1] Much of the district, including the Waning Crescent, was razed. Despite the totality of the carnage, the event ultimately worked against Elisande's cause, turning yet more nightborne (even members of her own Duskwatch[2]) against her in horror.

The Nightfallen headquarters within the city was moved to the nearby Evermoon Terrace in the aftermath of Starcaller Retreat's ruin. From there, the rebels would eventually achieve success in their mission to bring down Grand Magistrix Elisande and her allies.