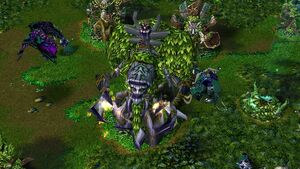 The Starseekers established their new base.

Starseekers are a faction within the night elves, they fought alongside the demigod Cenarius with the Shadowleaves, Nightblades, and Moonhunters against Grom Hellscream and the Warsong clan. The Nightblades destroyed the first Warsong base and the Starseekers established there, from which they sent periodic attacks against the Warsong clan. However when Grom found the Chaos Well, he and his orcs drank from it and became chaos orcs. With their burst of power they attacked the night elves and killed Cenarius himself.[1]