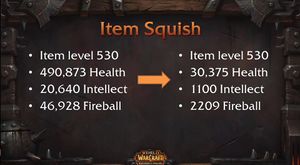 A slide from BlizzCon 2013 showing an example of the item squish.

The stat squish[1][2] (also known as the item squish[3] or simply "the squish") saw many numbers within the game scaled down, including stats on items, player and mob health, and damaging and healing abilities. The first squish was implemented in Patch 6.0.2.

The "stat squish" strictly refers only to changes made to items, but in practice the term is often used to encompass three related changes, which in combination acted to drastically alter numbers in the game. Because these changes were implemented simultaneously, for many the sum total of the combined changes is viewed as the result of the stat squish.

The combined result of this was to drastically reduce numbers throughout the game, while maintaining damage and health proportions between players and creatures; to make damage and healing less "spiky" and burst-oriented; to improve spell and ability damage scaling and tuning; and to make it easier for players to tackle lower-level content from past expansions.

Character progression is one of the defining characteristics of a role-playing game. Naturally, that means that we're continuously adding more power to the game for players to acquire. After 4 expansions and over 9 years of this growth, we've gotten to a point where the numbers involved are no longer easy to grasp. And worse, much of the granularity that's available is tied up in tiers of older content from Molten Core to Dragon Soul, none of which are really relevant anymore. It's no longer necessary for Borean Tundra quest gear to be nearly twice as powerful as Netherstorm quest gear, even though the two zones are only a couple of levels apart.

In order to bring things down to an understandable level, we've reduced the scale of stats throughout the game, back to as if they continued scaling linearly through questing content from levels 1 to 90. This applies to creatures, spells, abilities, consumables, gear, other items... everything. Your stats and damage have been reduced by a huge amount, but so have creatures' health. For example, your

The concept was first aired in a developer blog posted on November 3, 2011, regarding the numbers in the game growing larger than envisioned over the course of WoW's first decade. Blizzard is now trying to scale back the power that item level provides to make the numbers a bit more manageable. Stat inflation began in earnest during Wrath of the Lich King with the development of hard modes and the insertion of a fourth raid tier sending item levels far higher than they were originally anticipated to reach by the end of the expansion.

The stat squish was demonstrated in action for the first time to players two years later at BlizzCon 2013, and went live with the World of Warcraft: Warlords of Draenor mechanics pre-patch in Patch 6.0, a few weeks before the expansion was released with the new content.

Blizzard has stressed that the item squish will not affect the relative difficulty of killing any creature, or the ability to solo old content. As of Blizzcon 2013 they had yet to reveal how they will accomplish the latter, but an idea Ghostcrawler tweeted months earlier involved buffing high level players in low level raids to compensate for the reduced relative power. During a Q&A session, a dev said "If players could kill Gulp Frogs on the Timeless Isle in five seconds before the squish, it will take five seconds to kill them after the squish."

The squish will however affect damage and healing ability output more than player health, in order to reduce the importance of burst in combat.[5] For example, a tank may find their health reduced from something like 1 million to around 400k health at the start of the expansion. This is intended to make combat less concerned with burst and quick reflexes.

Over the course of five expansions, the power level jumps between tiers within an expansion have far outpaced character level. At the time, this made sense, as moving to a new tier of content should mean a jump in player power level commensurate with the creature power level in the new tier. In other words, a new tier of loot should always feel like an upgrade to the previous tier. Blizzard approves of large jumps between tiers, as they can tune raid encounters to be extremely punishing for cutting-edge raiders (still mostly geared from the previous tier) yet still accessible for other players who may not see the later fights or higher difficulty levels until they have grown much more powerful by obtaining current gear.

This is all well and good, but nearly a decade has passed since the release of the game. The power level jump between Molten Core (tier 1) and Blackwing Lair (tier 2), or even between Wrath of the Lich King and Cataclysm is utterly inconsequential in the era of Throne of Thunder (tier 15) and Siege of Orgrimmar (tier 16). As a result of the successive power jumps, currently near the end of Mists of Pandaria, the average damage-specialized raider has more than 600,000 health (more than most bosses in Molten Core) and is individually dealing more than 240,000 damage per second (nearly as much as an entire 25-player raid attempting heroic Al'Akir).

Additionally, bosses have run into issues where their maximum health has grown too high. WoW stores health values in signed 32-bit integers, which have a maximum value of 2^31 - 1, or 2,147,483,647. Ra-den, the heroic-only boss of Throne of Thunder, starts at roughly 1,500,000,000 health in 25-player mode. As part of the fight, if players make mistakes his health could increase to the point where it would overflow. In order to avoid repeating the problem, Garrosh Hellscream must heal (from 10% to full) several times with a smaller maximum health pool than would otherwise be necessary.

The table on the right provides an overview of the item level-vs-character level change over the course of the raid tiers of World of Warcraft. For the sake of simplicity, the table only shows the "normal" item level of most armor pieces and items in a tier. The table does not show Raid Finder, Flexible, or Heroic difficulties, nor Thunderforged/Warforged random drops, nor 10-man raids which varied from 7-13 ilvls behind during Wrath, nor raid end bosses' higher ilvl drops, nor Pandaria's NPC upgrades. It should be stressed that all of these give rise to considerable variation. By the time of the Siege of Orgrimmar items drop in no fewer than six different types (RF, Flex, Normal, Normal Warforged, Heroic, Heroic Warforged) and combined with the NPC upgrades, SoO gear ranges from 528 for stock Raid Finder gear up to 580 for 2/2 upgraded Heroic Warforged. As there will still be four difficulties in Warlords of Draenor this wide variation is expected to remain as well. 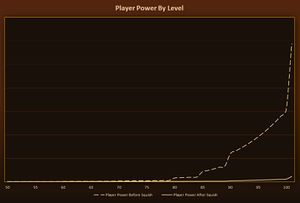 Please note: While the item squish has already been implemented in the expansion's beta, precise numbers have not yet been recorded and may still be in flux. The numbers here represent projections from earlier presentations.

Rather than having massive jumps between tiers in an older expansion, and from one expansion to the next, the plan in Warlords of Draenor is to flatten out the power curve. In all previous expansions' tiers, there will be a minimal jump from one tier (and one expansion) to the next, and the effective power that item level provides will be scaled back. The current expansion will still have notable power jumps between tiers, just like before.

From the "Pruning the Garden of War" blog post:

In order to bring things down to a more understandable level, we'll be reducing the scale of stats throughout the game and smoothing out those obsolete spikes, so that power scales linearly through questing content from levels 1 to 85. This applies to creatures, spells, abilities, consumables, gear... everything. And while that means your numbers for stats and damage are being reduced by a huge amount, the same goes for creatures' health and damage output. For example, a Fireball that previously hit a creature for 450,000 out of his 3,000,000 health (15% of its health) may now hit that same creature for 30,000 out of its 200,000 health (still 15% of its health).

It's important to understand that this isn't a nerf—in effect, you’ll still be just as powerful, but the numbers that you see will be easier to comprehend. This also won't reduce your ability to solo old content. In fact, to provide some additional peace of mind, we're implementing further scaling of your power against lower-level targets so that earlier content will be even more accessible than it is now.

Prior to the expansion's alpha test, Celestalon tweeted that the "squish [was] applied across the board (numbers about ~4% of what they were). Except player health, which is at ~8%."[6]

Using the numbers seen at BlizzCon 2013, the table below lists stats for a random level 90 gnome frost mage wearing similar PvE-focused item level 538 gear before and after the squish. Note that the stats are not exactly the same because the gear wasn't an exact match.