Complete the "Stay of Execution" Scenario.

Baine's time is short. We must act now.

Come. It is time to save a friend.

Thank you. This hasn't been an easy time for any of us.

A pity Bloodhoof and all the rest survived.

Our Warchief has anticipated this outcome, however.

Thank the Sunwell you were able to save Baine's life, <name>. Thank you.

And Jaina Proudmoore came to his aid as well. Interesting...

I am glad a champion of the Horde stands with us today.

I am ready to go.

With Saurfang branded a traitor by Sylvanas, the guards will attack us on sight.

Rokhan provided a totem that can conceal us for a time. Even so, wary guards may spot us.

Go carefully, <name>. I don't want to leave a trail of bodies in our wake. These loyalists are still part of the Horde. 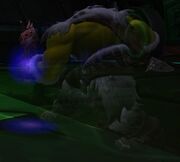 Thrall holding the Totem of Concealment.

All three are stealthed with the Totem of Concealment.

Entrance to the Forsaken section.

We've gotten this far, but the power of Rokhan's totem is fading.

Saurfang and I need another way to avoid being noticed.

Even these loyalists know you as a champion of the Horde, <name>. Perhaps you could provide a distraction.

I can keep them busy.

For wandering Hordies, a surprising but beautiful sight awaits!

After entering the room, Varok and Thrall sneak through. The first area is full of Forsaken War-Alchemists and Unruly Experiments. Continue further to the training area with Dark Rangers, Lyani Shadestalker, and Dark Ranger Lenara.

<Name>. You are a reasonably capable <class>. Do you seek to test your skills before returning to the war?

Yes I would. Care to duel?

After Lenara is defeated
Lenara kneels.

Well fought. I yield to your skills.

Well fought! I would like to inspect the troops you've been training.

Stage 5 – Traitors in Our Midst / Inspect the Troops

<The dark ranger continues to fire shots into the target as he speaks.> (also said by females)

<The Dark Ranger continues to strike target as she speaks.>

<The dark warden unleashes her rage upon the target dummy before her.

Perhaps it would be wise to let her be.>

Upon going further, a cutscene plays.

The longer we are here, the greater the risk. We must keep going.

It seems our lot has been thrown in with the Alliance.

I know what it is to fight against them, <name>. To feel the loss and rage of war in your heart.

But I ask you to put that aside... At least until our friend Baine is safe.

I will do this for Baine, and for the Horde!

I don't trust the Alliance, but I don't see another alternative right now.

It's time to end this war and work together.

The group presses forward. Dark Rangers and Underhold Elite Guards appear and attack in the tunnel. The gate is opened by Shaw.

Stage 8 – Strike Them Down!

Rowa is accompanied by her two wolves, Mukuta and Gunaz, while others are chained in the hall as well.

Gunaz dies
Rowa Bloodstrike says: That dog had more honor than you do, Saurfang!

Shaw working on the shackles

Magister Hathorel says: Rangers! Kill them all! FOR THE SUNREAVERS!
Varok Saurfang says: We will need an escape route once Baine is free.
Lady Jaina Proudmoore says: I can get us out, but not while these crystals are blocking my teleportation spells.
Varok Saurfang says: Then we must destroy them. Go, <name>!

After Lyani is dead, follow Jaina Proudmoore who uses Glacial Ray to destroy the shields around Elite Battlemages. Kill them and interact with Inhibitor Crystals to continue. 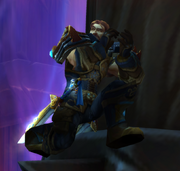 Shaw jumps on a pole and works on the locks.

Casting Annihilation
Magister Hathorel yells: None of you will escape these halls!

When Hathorel is defeated, he summons an Ice Block for himself. A cutscene plays. At this point, the quest objective is complete.

Master Mathias Shaw says: I've got him free!
Jaina Proudmoore says: Stay close. I'll get us out.
Jaina teleports the group out of the Underhold.