For the game mechanic, see Stealth (mechanic). For the enchant, see

Fear those that move in the shadows.[1]

Stealth is a level 5 rogue ability that prevents other creatures from detecting the stealthed player unless particularly close.

Attacking and most actions such as looting will cancel Stealth. Taking any damage will cancel Stealth, including direct, AoE and DoT damage, and environmental damage such as fires. However, Stealth does not break from falling damage, unless of course it kills the stealthed unit. You cannot enter Stealth while in combat. 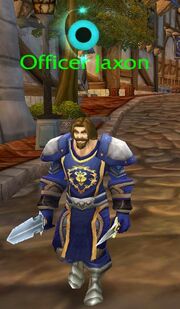 The 'Anti-Stealth eye' over Officer Jaxon's head in Stormwind.