From Wowpedia
(Redirected from Steam Vault)
Jump to: navigation, search

The Steamvault (also known as the Steam Vaults) is the level 70 wing of the Coilfang Reservoir. No key is required to enter. You must defeat the first and second bosses and operate the control panels behind them in order to enter the room with the final boss.

The Steam Vaults serves as the mechanical heart of Naga's draining operations in Zangarmarsh. The mechanisms on display within the massive cavern supply the power for the actual act of removing the marsh's water. As a result, the Steam Vaults is perhaps the most strategically important wing of the Coilfang Reservoir for adventurers looking to put a stop to Lady Vashj's efforts.

Coilfang Reservoir is the name for a naga-dominated compound that lurks under Zangarmarsh's deepest waters. The reservoir, punctured throughout by massive open pipes and pistons, seems big enough to house armies - and, yet, its purpose isn't strictly military. 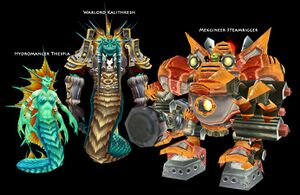