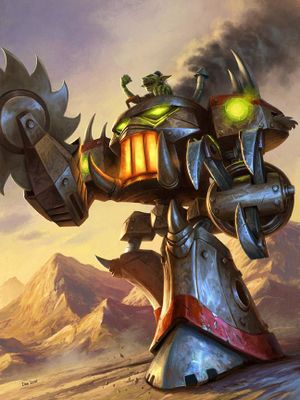 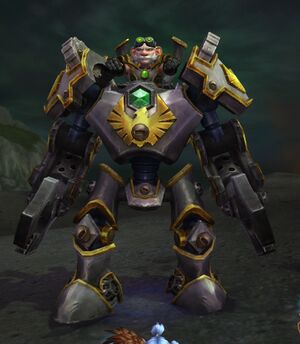 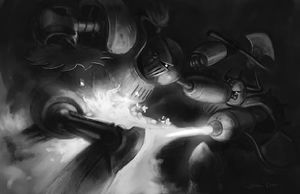 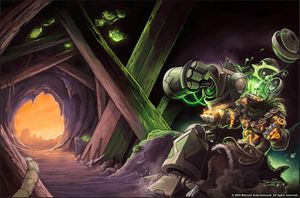 Technology has given rise to advances in metallurgy, pneumatics, hydraulics and powered mechanical systems. With the frequency of conflict in Azeroth it was only a matter of time before the power of phlogiston-driven technology hit the battlefield, and during the last war the goblins arrived with a new weapon.

The goblin harvester was the first insidious introduction to a new series of steam-powered armors. The suit could level forests and troops, and take an insane amount of punishment before falling to the withering hail of spells and gunfire that unfailingly targeted it when it appeared in battle. The harvester wrought incredible results — none could deny the power of such a creation. The gnomes and the dwarves stared in the direction of the gleefully wicked goblins running rampant with their new innovation, and collectively slapped themselves in the foreheads for not thinking of it first. Within a handful of years, a group of more complex and powerful suits arose, designed by dwarven and gnomish hands. The steam armor race was on.

Early steam armor was built with crude plates of iron and a steam-driven inner framework of mechanical pistons and hydraulics that served as the armor's muscle. Mechanical systems and drives interlocked to provide power to weaponry or tools mounted on the extremities. In most cases, the armor was built to resemble a humanoid form, although many incorporated some element of the fantastic: aspects of gargoyles, leering faces, griffin helms, and other flourishes that made the armors more fearsome and awe inspiring.

Modern steam armor is based on modern technology and uses the refinements of dwarven and gnomish craftsmanship. Goblins rely on pell-mell construction; the older suits having proven reliable enough, goblins don't see much reason in adding to the design, and simply go on to build new devices.

Gnomish and dwarven steam armor tends to be lighter and faster, and operates with a varying degree of maneuverability. Goblin steam armor is heavier and much more powerful, but not anywhere near as fast or customizable.

Steam armor is almost always built with some form of integrated weaponry. Buzzing saws, blades, long piercing spikes, even steam powered ballistae and cannons have been seen attached to steam armor. Whether mounted on the arms, shoulders, or even the backs of steam armor, most of suits have at least one or two weapons they can use in combat.[1]

The Mechanics of Steam Armor

The operating parameters of steam armor allow for an individual to turn himself from a single man into a massive engine of destruction. Yet the armor has its vulnerabilities. Such complex systems of mechanical interactions are prone to fail at some point, and the stresses of combat and conflict cause even more strain on what would otherwise be sturdy systems.

Yet the rigors of combat are exactly what steam armor is built to endure. Because of this property, those who rely on steam armor, the steam warriors, often take to customizing and building the armor to suit their particular needs. There are a variety of devices and attachments that can be inserted into a suit of steam armor to enhance its functions and increase its capabilities. To ensure the armor lasts, most steam warriors also build redundancies, failsafe systems, and various features into their armor to ensure their survival.

The dangers of using steam armor are usually not visible to the novice. For one thing, the armor is a tactical magnet for attention, causing even the shrewdest of commanders to direct his troops to defeat a suit of steam armor with the utmost effort and determination. So powerful is steam armor that even a couple of suits of the stuff can easily turn the tides of battle. In some cases the steam armor and the steam warrior inside save countless lives simply by showing up and proving that their force is indeed the superior one.[2]

Most steam armor is more than just a collection of furnaces, armor plates and technological gizmos. A cunning steam warrior makes the most of his steam armor, adding components to it to increase its capabilities and its potential in battle. This means a variety of mounted equipment, weapons, integrated technological systems and other inventions.

There are three types of steam armor equipment: weapons, shields and systems. Weapons deal damage. Shields are methods of defense. Systems are miscellaneous pieces of equipment that add to the steam armor's functions.[3]

Used primarily against soft, unarmored targets, the dragon mouth is a nozzle, often incorporated into a stylized dragon's head, that sprays a burning alchemical mixture. The dragon mouth sprays a 30-foot cone of burning liquid.[5]

The steam armor suit includes a large power core, and wires connect to it and crawl across the armor's surface. When activated, the power core electrifies the suit.[5] 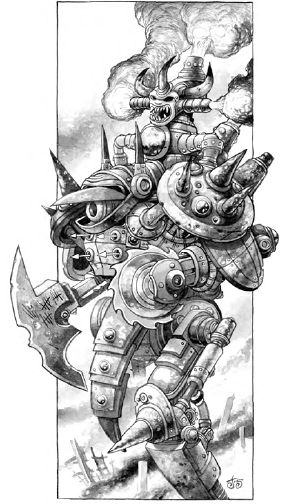 Steam armor suits often use shields on the battlefield. Not only do these provide extra protection, but the immense size of some of these shields allows them to stopgap walls and bulwarks against enemy fire. Steam armor suits can carry shields just as creatures can.In addition to these standard shields, some steam armor suits include specialized defensive measures, such as the following.[5]

A series of reflective plates cover the steam armor, and lighting rods project from its back and shoulders, thrusting into the ground when it walks, grounding it and protecting it against electrical attacks.[5]

The steam armor's structural integrity is reinforced so it can shake off attacks that would cripple it otherwise.[5]

The steam armor includes half a dozen small (mouse-sized) clock-and-steamwork automatons. When released, the bots exit their storage facility and crawl across the steam armor, repairing breaks, tightening bolts and patching leaks.[6]

Steam armor that contains a reserve tank of air. The operator can breathe the air from the tank to ignore the effects of inhaled poisons and immersion in water. The onboard air supply lasts for 1 hour.[6]

An extra cockpit that provides a comfortable station inside a steam armor. A copilot has the ability to fire the armor's ranged weapons or aid the operator's attacks. Melee combat, defense and movement remain under the control of the main operator of the steam armor.[6]

Fighting at night is a tactic often used by the Horde against humans and other opponents who have difficulty seeing in darkness. The darkvisor is a gnomish invention for human steam warriors designed to aid them in nighttime combat, and to give them the ability to function in dark terrain without worry. The operator gains darkvision out to 60 feet, and low-light vision.[7]

The nagahunter submariner pack was refined by gnomish inventors exploring the seas off the coast of Kalimdor. Frequent run-ins with sentient aquatic humanoids and aggressive crustaceans forced the gnomes to devise a method of surviving brutal underwater combat in specially constructed steam armor. In some cases such steam armor is attached to submarines of gnomish design, allowing the armor to deploy off the submarine and dock to resupply.

A nagahunter submariner pack allows a suit of steam armor to move at its full speed underwater (walking, not swimming), while remaining watertight and holding an air supply that lasts for a full 24 hours.[7]

This extra cockpit merely provides a comfortable place inside the armor for a passenger to sit. The passenger can't do anything other than observe the surroundings (seeing exactly what the operator sees) and communicate privately with the operator. The operator can prevent a passenger's exit by locking the hatch.[7]

The Phlogiston Strength Boost is steam armor with an extra, small, fastburning phlogiston furnace that is capable of supplying a brief burst of power to the armor's hydraulic systems.[7]

Ranged combat is a common occurrence in Azeroth thanks to the invention of the firearm. In order to enhance the abilities of steam armor and the use of ranged weapons, the reticle lens was created. Using a luminescent alchemical compound and a special weapon attachment, the reticle lens grants the operator of a steam armor superior targeting capabilities with firearms. The operator gazes through the lens, and a glowing alchemical crosshair allows the operator to line up the sights of her weapon with her target with an increased level of accuracy.[7]

The steam armor gains a series of cutting edge modifications to its superstructure.[7]