From Wowpedia
(Redirected from Steamwarrior)
Jump to: navigation, search 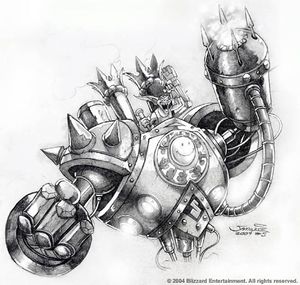 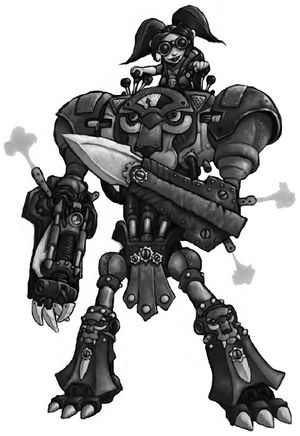 Steamwarriors (a.k.a. steam warriors) are mechanics who take their skills to the battlefield by building walking suits of phlogiston-powered armor. Though the armor of most steamwarriors takes on a generally humanoid form, a suit's functions are as individualized as its pilot. The only activity most steamwarriors enjoy more than using their armor in combat is tinkering with it between battles, improving old functions and adding new ones.[1]

Some were born to steam, gifted with the measures of mechanics and systems, and possessed with an unquenchable thirst for invention. Among those inventors are individuals who push their creations to the limits of technology, testing them in battle, and relying on them for their survival. These are the steam warriors.

Some might crudely explain that steam warriors are mechanics who trudge from place to place in phlogiston-powered armor. Ask a steam warrior what his calling is, and he'll tell you of the thrill of battle, the sound of metal clashing against monster scales, and the surge of adrenaline as a whirring blade slices through metal, flesh, or bone. To a steam warrior, life is more than just the surge of phlogiston through a steam plant, or the thrum of engines driving weapons of destruction. To a steam warrior, it's all being behind the controls of a massive monolith of powered iron, and seeking to destroy any enemy that crosses his path.

Steam warriors are often innovative souls who customize and build their own suits of steam-powered armor. Still, many are willing to pay a tinker his worth in coin to have the armor modified to exacting specifications. While a steam warrior might know the inner workings of his armor intimately, he doesn't need to be a skilled tinker in order to use it. Relying on the expertise of others has become more and more commonplace as gnomish and goblin technology becomes more available to agents of both the Horde and the Alliance.

These gladiators of steam and steel cross the fields of warlike massive myrmidons, intent on dealing out punishment with any of a variety of weapons strapped to their armor. The excitement of combat, the power at their fingertips, and the massive weapons they wield are motive enough for others to respect their capabilities, but steam warriors go beyond the simple armor they wear.

In battle steam warriors are fearless and resolute, capable of enduring the withering fire of musket, spell or arrow. Their skill at piloting their steam armor allows them to move gracefully and with tremendous speed, reacting faster than one would think possible. While others might simply wear and operate steam armor, steam warriors are their armor, merging with it using a combination of skill and concentration - controlling it as easily as a master swordsman wields his blade.

Amid the Horde, the few who have the knowledge and inclination to become steam warriors are mostly hired goblin mercenaries, although, oddly enough, trolls also seem to take to the life of a steam warrior. Orcs and tauren rarely find themselves concerned with the mechanical, and thus rarely pursue the steam warrior's path.

Goblins excel at the craft of steam, and they produce some of the most devastating and cunning steam warriors alive. For a goblin, steam armor is simply an extension of the desire to attain power. Becoming a steam warrior for a goblin is as much a part of attaining status as it is a decent way to make money. These goblin steam warriors hire themselves out for a price, seeking the highest bidder and working with little regard for diplomacy or future relation.

Many steam warriors form chapters or guilds, congregating in groups and sharing their technical expertise and backing each other up in combat. These cadres often become elite mercenary units serving either the Alliance or Horde or even splitting off to form independent factions willing to serve either affiliation. Goblins are notorious for forming these groups, luring in outsiders, and then stealing their technological expertise for their own use.

Most of Azeroth's denizens view steam warriors with a combined sense of wonder and fear. Steam armor is an impressive and intimidating sight. The sheer strength of the armor, combined with its portable arsenal, is a source of speculation, terror, and awe to those who have never seen such things. Those who have seen steam warriors in action know that the best course is to get out of the way. Whether an ally or an enemy, steam armor has the tendency to harm anyone outside the suit who gets too close.

Most steam warriors see themselves first as warriors and second as tinkers. Their armor is built for war, and they enjoy using it as an instrument of battle. Most see themselves as the vanguard of a new era of knights and inventors, striding into battle within their phlogiston-powered suits.

The steam warrior is not a common sight. Cadres often number less than a dozen, and the resources required to keep armor combat-ready can be significant drain. In the wars plaguing Azeroth, the steam warrior has yet to have made a significant impact — although many feel that their time is soon to come.[3]