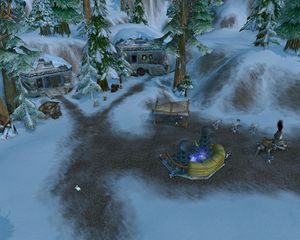 Steelgrill's Depot is small settlement of miners and engineers that lies just east of Kharanos in Dun Morogh. There are three trainers, some vendors, and a few low-level quests available in the settlement. The Operation: Gnomeregan quest chain has several quests here.

Steelgrill's Depot, just around the bend after Kharanos, is a hangout for siege engine drivers where Beldin Steelgrill hires anyone he can to assist in gathering parts for the maintenance and repair of siege engines. The depot is a solid stone complex, with numerous workshops and wooden awnings to fix vehicles and protect them from the elements. The skeletons of incomplete siege engines lie half-submerged in the snow surrounding the enclave. Brann Bronzebeard decorated one such wreck with the heads of all the troggs he killed nearby.[1]