Stellagosa is a blue drake located at the Azurewing Repose in Azsuna. She typically wears the guise of a blue-haired, blue-eyed high elf. She is shown to be very knowledgeable about ley lines and other topics of magical research. She is the granddaughter of Senegos, the leader of the Azurewing, the Azsunan brood of the blue dragonflight. 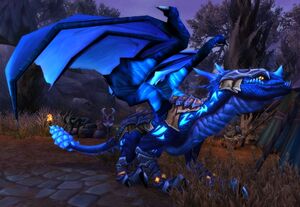 Stellagosa in her blue drake form.

Stellagosa is first seen in Faronaar, having been captured by Overseer Lykill of the Burning Legion. Working alongside Kor'vas Bloodthorn, the Order Hall leaders free her.[1] In return, she aids her saviors in slaying the traitorous felsworn Cyana Nightglaive. After flying them back to the Illidari Stand, she asks if they can help her grandfather.[2]

The adventurers and Archmage Khadgar arrive at the Azurewing Repose, finding Stellagosa's grandfather, Senegos, in a very bad condition.[3] As his mana pools no longer sustain him, the adventurer helps find mana crystals to stabilize his condition, as he tells them the fate of the

[Tidestone of Golganneth] in return.[4] However, Agapanthus relays that the Nightfallen exiles are attacking the Azurewing's baby whelps and Stellagosa asks for the adventurer's help in saving them. On the way, she finds the corpses of her dead little brothers and sisters, mourning them.[5] After battling the nightfallen, Stellagosa feels drained from their mana-consuming powers and needs to retreat after sending the adventurer after Runas the Shamed.[6]

After Runas, Senegos, and the adventurer destroy the mana siphons depleting Senegos' mana pools and anger Ael'Yith, she carries the adventurer back to Azurewing Repose, horrified that a massive horde of nightfallen is descending upon her brothers and sisters.[7] She kept the whelplings safe while the adventurer and Khadgar dealt with the nightfallen.[8]

During the Nightfallen rebellion, Arcanist Valtrois shared that they needed to redirect some of the leylines in Azsuna to help the Arcan'dor flourish with enough fruit to feed her people. She traveled with the Nightfallen's champion to Azsuna, where they were confronted by Stellagosa. Initially suspicious, she is convinced to help the Nightfallen with her vast knowledge of ley lines. Through talks of magic and exchanges of witty banter, the two women overcome their animosity and become friends.[9]

As Valtrois was too tired to teleport back to Shal'Aran, Stellagosa transforms and flies her companions back. Valtrois stays with Stellagosa a while longer as they fly away together, asking Stella more questions about leylines.[10]