Stonard is the lone Horde outpost located in the Swamp of Sorrows. Regular patrols are sent out, and a number of small orcish encampments have been established nearby to further strengthen the Horde's control over the region. It is one of the few orcish communities to still have a great hall in its midst and is protected by two burrows. Several trainers and vendors can be found at the post. Mages with sufficient skill can learn to

[Teleport] or open a portal to here.

Previously, Stonard was notable for being the location of the horde master alchemist and the only Horde shaman trainer in the Eastern Kingdoms.

The town was originally established by the Old Horde as an outpost in the Black Morass after the first opening of the Dark Portal. It is one of the oldest orcish settlements of Azeroth, along with the fortress formerly known as Rockard.[1]

During the Second War, Stonard was probably destroyed or abandoned but has since been re-established as an outpost with the formation of the new Horde and the orcs' renewed interest in the area. Although Stonard was reconstructed, Rockard was taken over by the Dreadmaul ogres who renamed it as Dreadmaul Hold.[1]

Stonard is a center of operations for adventurers who seek to enter the Temple of Atal'Hakkar, and one of the closest Horde outposts to the Dark Portal, which is located in Blasted Lands to the south. Until the retaking of Dreadmaul Hold, it was the only Horde outpost in the nearby regions.

The swamp was still largely an uncharted territory to the orcs, who were sending wayfinders and cartographers to map the region.

Due to its location near the vulnerable Alliance territories of Redridge Mountains, Elwynn Forest and Duskwood, Stonard has recently become the target of a renewed Alliance war effort. In opposition to Stonard, Marshtide Watch was built on the edge of the Pool of Tears to the northeast. As a result, assaults against Stonard by the Alliance are now a common occurrence, with the main field of battle being the Bloodmire.

In the human campaign of Warcraft: Orcs & Humans, Stonard and Rockard are mentioned as the last defense of the Horde before Blackrock Spire and both were destroyed at the end of the campaign.[2] Since the last stages of the human campaign are not canon, both survived the war. 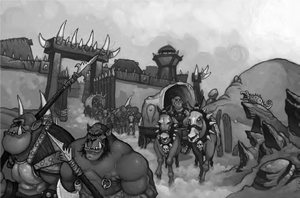 Stonard in the Lands of Conflict RPG.

This southern town lies just off the Swamp of Sorrows' only road. Formerly used as an orc stronghold during the wars, now it functions as a Horde outpost. While populated mostly by orc warriors, some do follow their calling as shamans.

It is protected by 8-foot walls, and sentries watch every gate. Although there is little traffic through the swamps, the orcs must guard against Alliance attacks. They send caravans to their allies in Stranglethorn Vale to trade for supplies twice a year, though the town does boast several weaponsmiths who create beautiful weapons with the ore they trade for.

The orcs are, if not friendly, certainly not the evil orcs that fought in the wars. There might actually be something to the claims that the Horde and the Alliance are at truce in the west.[3]