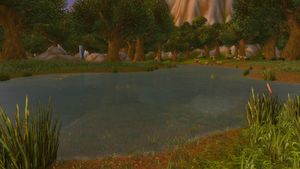 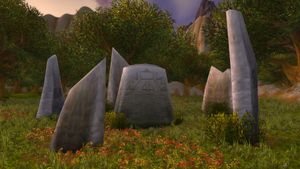 Stone Cairn Lake is situated in northeastern Elwynn Forest, and holds one large island that gives the lake a characteristic ring shape. The lake is named after Heroes' Vigil, the stone cairn monument erected upon the island to commemorate the huge loss of life during the First War against the orcs.

While the lake has previously been a safe place to make pilgrimages to, it has now fallen into the hands of Rogue Wizards who have settled on the island. The water also holds a tribe of murlocs who have raised crude structures on the southern banks of the lake. This area has possibly the highest concentration of Copper in Elwynn.