"Jade Guardian" redirects here. For other mobs called "Jade Guardian", see Jade Guardian (disambiguation).
This article is about the raid encounter in Mogu'shan Vaults. For the PvP achievement, see

The Stone Guard is the first boss in Mogu'shan Vaults. It is a council encounter with three targets on 10-man and four targets on 25-man.

The first line of defense against those daring to enter the vaults is a stolid row of enchanted, bestial statues. Hard as granite and ceaseless in their vigil, the sentries of the Stone Guard present an insurmountable wall of flame, fangs, and claws.

Each guardian gains energy when it is within 12 yards of another guardian. This energy can be used to cast its colored Overload. If no other guardian is within range, the guardian instead gains the Solid Stone effect. 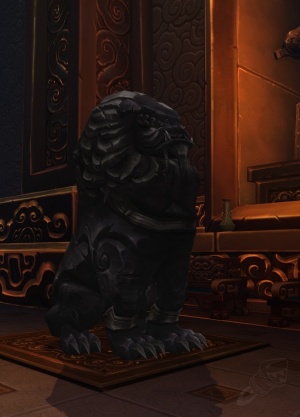 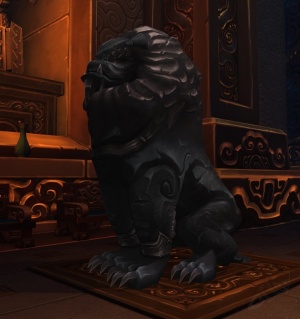 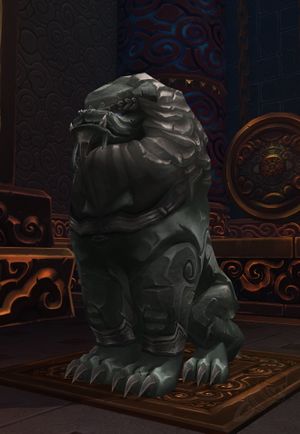 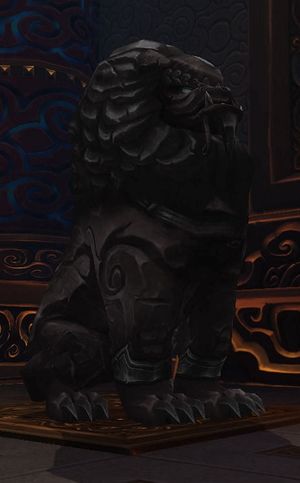 The Stone Guard is a one-phase council-style encounter where the raid will encounter a series of three (10-player and LFR) or four (25-player) Quilen Guardians. The Guardians have a shared health pool and each has its own resource bar which represents its energy.

Each Guardian gains energy when it is being tanked within 10 yards of another Guardian, and at max energy will use its Overload ability, which will do a large amount of raid-wide damage. Simultaneously, one Guardian will always be petrifying the raid, reducing the damage it deals by its own abilities by 90% and slowly turning the raid to stone. If petrification reaches 100 stacks the raid will wipe by virtue of being unable to move or act, but the petrification process can be interrupted if the guardian that is petrifying Overloads before petrification finishes.

As such, the primary focus of the encounter on all difficulty levels is for tanks to juggle aggro on the Guardians such that the Guardians only Overload when they are also petrifying while healers and DPS focus on dealing with the Guardians' various other abilities.

These are the ideal raid compositions, but similar configurations may work just as well. Note that proper execution of the optimal strategy does require two tanks on 10-player mode and three tanks on 25-player mode.

The encounter has an 8 minute hard enrage timer and no soft enrage mechanics. After 8 minutes the Guardians will gain vastly increased attack speed and damage and will wipe the raid in a matter of seconds.

In LFR, it is advised to simply gather all three Guardians in the center of the room and attack all three simultaneously, while simply healing through Overloads and raid damage, as these abilities do far less damage in LFR. Players must still avoid Cobalt Mines and Amethyst Pools, and remain near each other when affected by Jasper Chains, as described below.

In both raid sizes, it is best if ranged DPS and healers spread out loosely in the center of the room while melee DPS stack with the current main tank.

If a Guardian overloads when it is not petrifying, tanks should use their defensive cooldowns to buy healers necessary time to heal the raid.

Healers should pay attention to Rend Flesh on their tanks and try to prevent or effectively heal through this damage quickly.

While proper execution of the tank swaps should result in Overloads from non-petrifying Guardians being rare or nonexistent, it is best for healers to save their burst healing cooldowns for these, as they are extremely damaging and may result in multiple deaths.

It is generally not worth going through the trouble of breaking the Jasper Chains, but if your raid opts to do so, you should only do it when the Jasper Guardian is petrifying, and healers may need to focus additional healing on the affected players. Affected players should check the Guardians' energy to avoid doing this too close to an Overload.

Since the Guardians share a health pool, it is best to take advantage of this with cleaves and multidotting on the two Guardians being held by the main tank. No DPS should be focused on the Guardian(s) being tanked separately, as Solid Stone will reduce damage on these by 90%.

All members of the raid need to be aware of the Amethyst Pools and Cobalt Mines and make an effort to move out of both of them. The Amethyst Pools do constant damage to any players standing in them, while the Cobalt Mines will arm after a few seconds and then explode if anyone is in or enters the circle, dealing damage and rooting all affected players in place. Cobalt Mines that never explode should be cleared by DPS or healers whenever the Cobalt Guardian is petrifying, as this will reduce their damage by 90%.

Breaking the chains should only be attempted when the Jasper Guardian is petrifying, reducing most of the damage from the chains. However, the players must ensure that the Jasper Guardian will not overload before the chain breaks, because this may result in one or both of the players dying. The Jasper Guardian does use Jasper Chains fairly often, and it is often advantageous to simply have players who are chained stay near each other rather than worrying about breaking them. This can however be very inconvenient when a melee DPS is chained to a Healer or a ranged DPS as the melee has to move a lot to keep in range of the Guardians being tanked together and to dodge the Amethyst Pools and Cobalt Mines.

Given that this is a single-phase encounter that does not become progressively more difficult over the course of the fight, it is best to use these abilities at the pull when all players are alive and can benefit from their procs and cooldowns when attempting it on Normal mode. On Heroic mode, it would be best to use it when the floor has as many energized tiles as possible.

In general, the encounter on Heroic Mode is very similar to its Normal Mode counterpart, but does introduce a new mechanic relating to the tiles on the floor. After the pull, a crystal will be present where each Guardian spawns. If a player clicks this crystal they will receive a debuff called Living Jasper, Living Jade, Living Amethyst or Living Cobalt applicable to the color ofthe Guardian that spawns there. On 10-player mode, the player will receive 10 stacks and on 25-player mode they will receive 7.

This debuff does damage every second to the affected player, but stacks may be quickly dropped by running across the white tiles on the floor of the room. When a player runs over a tile while the debuff is active, it will become an Energized Tile and glow brightly and the player will lose one stack of the debuff. Each tile that has been energized will increase the raid's damage and Spirit by 1%, and this effect stacks for each additional tile that becomes energized. The raid leader should assign a few DPS players to click the crystals after the pull and then these players should energize tiles in the room until the number that your raid is comfortable with have been energized.

The Guardians will reset the energized tiles with their Power Down ability when they reach 75% health and again when they reach 40% health, thus requiring the raid to energize them again in order to restore the buff.

The only other difference on heroic mode, which does not necessitate a change in strategy, is that the Guardian(s) tanked by the off tanks will not lose their current energy when they are in Solid Stone state.